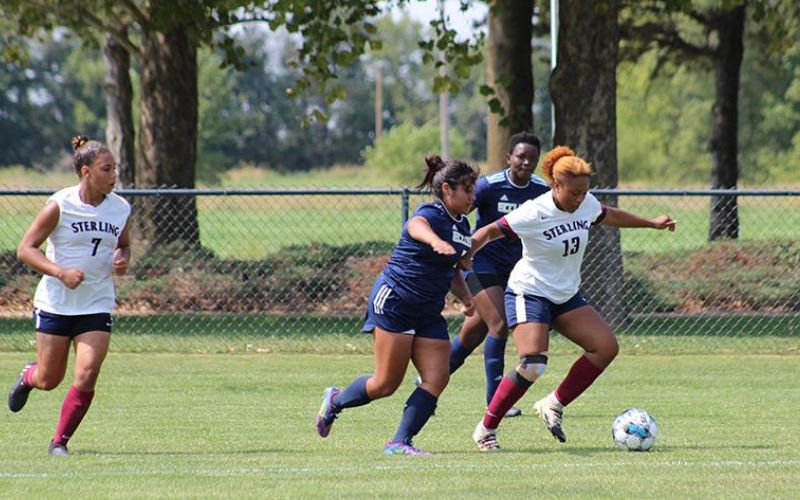 Sterling, Kan. – The weather was not ideal for soccer as there was a 40 mph north wind blowing most of the afternoon in Sterling. The Sterling College Lady Warriors (3-4, 0-2) took on the Ottawa Braves (1-4-2, 1-1) as these two teams sought their first conference win of the season.

Sterling kept to a defensive mindset as they are short on numbers this season, trying to pinpoint the right opportunity to go after a quick run to score a goal. Ottawa came out aggressive and subbed aggressively keeping fresh legs in the lineup when the Warriors were not able giving them a distinct advantage.

Sterling was outshot 18-2 in the first half yet the halftime score was just 3-1. Shaylee Gibbs picked up right where she left off last season with 8 first-half saves, and ended with 18 in the match. Ottawa scored two goals in the first 25 minutes of play, one in the 24′ and one in the 25′. A couple minutes late the Warriors found an opportunity to push the ball up the field. Jessica Gautreau, one of the Warrior’s main offensive threats, found an opportunity in the 28′ on a rebound to put the ball in the back of the net from about four yards out. It was Gautreau’s third goal of the season. The score put Sterling back within a goal at 2-1 with plenty of time remaining in the match. Late in the first half, Ottawa was able to tack on one more goal to make it 3-1 at halftime.

In the second half, Sterling had the wind, but not the legs. Ottawa continued to mass sub and Sterling was not able to put together an offensive push. They had a few good opportunities in the half, but were not able to put anything in the net. Ottawa scored the final goal of the game in the 85′ to secure the win, 4-1.

Sterling is now 3-4 on the year and 0-2 in conference play. They return to the pitch Saturday afternoon against Southwestern Christian University at 2 pm in Sterling.