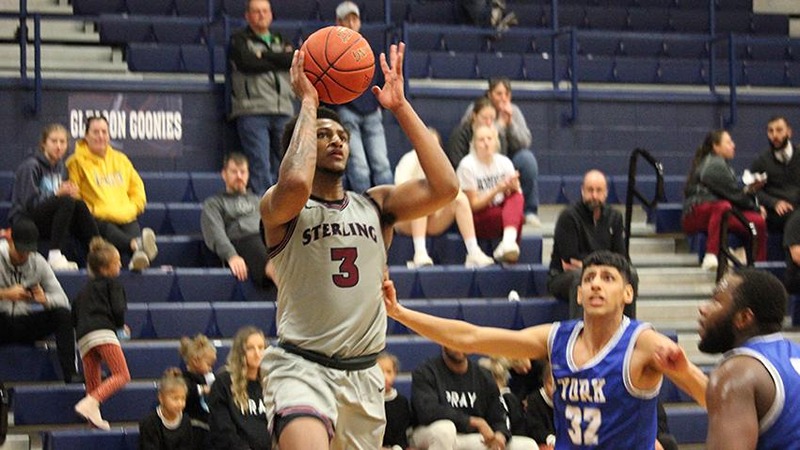 Derrian Reed finds a seem to get a shot off in the second half in the Warrior's win over York.

Sterling, Kan.- It has been a long time since fans have seen a conference win in the Gleason Center for the Sterling Warrior Men’s Basketball team. Tuesday night was the night for the Warriors to give them a happier Thanksgiving. Sterling battled back from an early deficit and held on to a late lead to get their first home conference win in over a season. Sterling defeated York 83-73.

Sterling was down five early in the ballgame but fought to get back to even at 11 with just under fourteen minutes left in the first half. After a couple of scoreless minutes for both teams, York broke the scoreless stretch and went on an 8-0 run to take a 19-11 lead. Sterling answered right back and went on a 10-0 run of their own. From the time that Sterling was down 19-11 until halftime, Sterling went on a 31-14 run giving them a 42-33 halftime lead.

Three Warriors were in double-digits by the break. Derrian Reed led all scorers with 15 points. Cedric Rollerson and Elias Ngoga each had 12. Ngoga also grabbed 6 rebounds before halftime. Leading all rebounders was Sienion Dozier with 8.

Sterling spent the first ten minutes of the second half turning their 9 point lead into a 23 point lead with just over 9 minutes to play in the game. During the ten-minute stretch, the offense was run primarily by getting the ball on the block and letting Sterling’s big men, John Barnhill and Ngoga, distribute the ball to their teammates, making the occasional drop step move to the basket for an easy two. Sterling was still very much in control at the 5 minute mark left in the game. Sterling was holding firm to a 19 point lead, but a quick burst of energy and an aggressive full court press allowed the Panthers to cut deep into the Warrior lead. In just three minutes, York cut the 19 point lead into just a 10 point lead and eventually down to an 8 point lead with 1:23 left in regulation. Down the stretch, Sterling hit nine of ten free throws to secure the victory for Sterling.

Sterling came away with an 83-73 victory over the York University Panthers. It was York’s first conference loss of the season. Sterling improves to 4-3 on the season and is now 1-1 in KCAC play. The win was the first for Sterling in KCAC play since February 17, 2021 and the first in the Gleason Center since one week earlier that year on February 10, 2021. It’s a new era of Warrior men’s basketball at Sterling and it is exciting to watch.

Cedric Rollerson led the Warrior offense with 21 points, 8 from the free throw line, 4 assists and 3 rebounds. Elias Ngoga scored 19 points and put together back-to-back double-doubles adding 12 rebounds. Derrian Reed scored 17 points for Sterling, and Lucas Briar added 12 points on limited minutes due to foul trouble. Sienion Dozier made his presence known on the boards leading all players with 13 rebounds and being very active in the lane on defense.