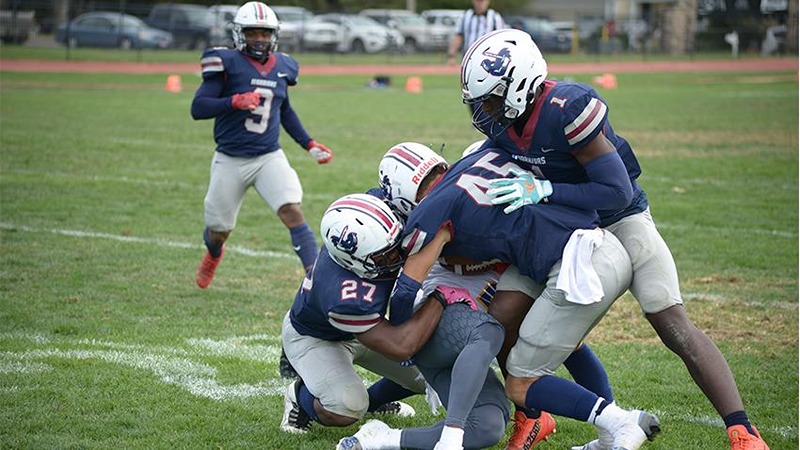 Ottawa, Kan. (SCWarriors.com) – Warrior football put another notch in the win column against the Ottawa Braves on Saturday. As the regular season begins to wind down in the KCAC it was a battle of two evenly-matched teams. Sterling football was able to flex its muscle in the 28-13 win.

Although Sterling trailed in several key statistical categories, they were able to make the most of timely turnovers and the ability to seek out the quarterback.

It was an unfortunate start for the Warriors on the opening kickoff where some miscues had them starting the opening possession from their six-yard line. A 41-yard punt by Mason Cobb pushed the Braves as far back as could be expected but still gave Ottawa great starting field position. The Warrior defense did well and only allowed Ottawa to get close enough to kick a 36-yard field goal.

Ottawa was able to block the Warrior’s next punt and started at the Sterling 25 but missed the 32-yard field goal. Neither team was able to put another score on the board before the end of the first quarter.

The second quarter sparked something in the offense. After a 56-yard punt to force the Braves to start at their own 20, Sterling’s Caleb Lambert intercepted a pass at the Brave 38 and returned it 22 yards to the 16-yard line. Three plays later, Sterling found the end zone on a Rocklin Baptista 10-yard pass to David Timmons. Sterling had their first lead of the day, 7-3. A couple of possessions later, it looked like Sterling was going to extend the lead, but a forced fumble on the Ottawa 6 led to a 64-yard return. The best defense on the return for the Warriors was the Braves themselves as the return man bumped a teammate and eventually tripped himself up on what would have certainly been a touchdown. Ottawa found the endzone later in the drive and took a 10-7 lead into halftime.

Both teams put extended drives together in the third quarter but neither was able to put any points on the board. Heading to the fourth quarter Ottawa maintained the 10-7 lead.

The fourth quarter was almost all Sterling. Knocking on the door at the end of the third quarter, Sterling found the endzone on the first play from scrimmage. Rocklin Baptista found Kenneth Arroyos on a 14-yard touchdown pass that gave the Warriors a lead they would not relinquish. With Ottawa moving the ball quickly down the field, Sterling forced a fumble that was recovered by Hunter Pullen who returned the ball 60-yards for the score. Sterling scored twice in 5 plays and made it a 21-10 game. Ottawa effectively moved the ball down the field on their next possession but was held to a field goal once again.

Looking to run the clock with just under 10 minutes left in the game, Sterling quickly broke down the Brave defense with a run of 24 yards by Dylan Reese. Two plays later, Ryan Stucky put the nail in the coffin with a 27-yard touchdown run to extend the Warrior lead to 28-10.

Defensively, Hunter Pullen led all Warriors with 13 tackles and had the fumble recovery and return for a TD. Diego Moran had 9 total tackles, 2 for a loss and broke up a pass. Deven Rodgers and Caleb Lambert each broke up 4 passes defensively and Lambert also had an interception. Flin Cameron had 3 sacks on the day and Jamel Harris contributed another. Luis Franco was 4-4 on PATs.