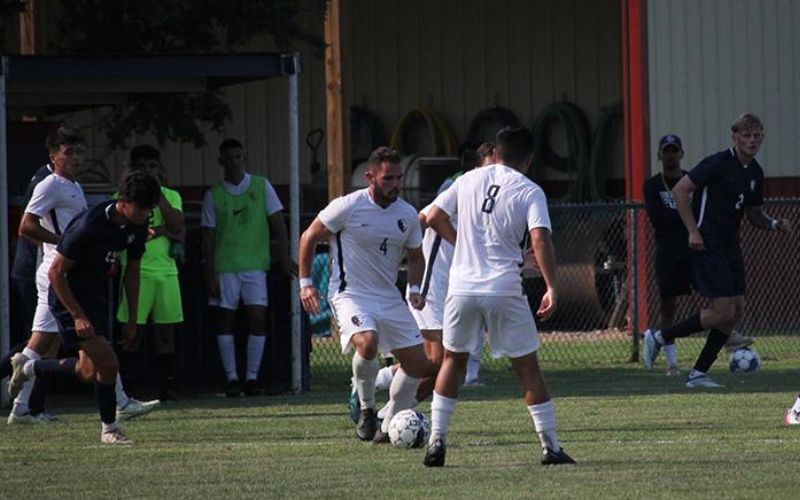 Sterling, Kan. – Sterling Men’s Soccer returned to the pitch Wednesday afternoon on a blustery cool day at Sterling College. The Sterling men (1-4-2, 0-2) faced the Ottawa Braves (5-2-1, 2-0) in what proved to be a highly contested battle that came down to the final buzzer to determine a winner. Ottawa came away with the 2-1 win when it was all said and done.

Ottawa got on the board first when they were awarded a penalty kick for an illegal tackle that took place in the box. That goal occurred in the 11′ to put Ottawa up 1-0. Both teams traded shots over the next fifteen minutes before the Braves punched another goal through in the 35′ to give the Braves what ended up being the game-winning goal.

Sterling’s only score of the game came on a Jacobo Sanfeliu penalty kick. The Warriors were awarded the kick when an Ottawa defender was called for a hand ball inside the box. The goal was Sanfeliu’s sixth of the season, leading the way for the Warriors.

Sterling was the aggressor in the second have outshooting the Braves 12 to 4. Both keepers made outstanding plays as each team had opportunity to run in transition. Sterling gave their best down the stretch getting several shot opportunities. Sanfeliu and Senior, Nico Galvez, were relentlessly attacking when on the offensive end of the field but were unable to find the net in the closing moments of the game.

Sterling is now 1-4-2 this season and 0-2 looking for their first conference win of the season. Next up for the Warriors is Southwestern Christian University on Saturday afternoon at 4 pm. The game will be at Sterling College.

Be sure to check for news and updates on Sterling Warrior Athletics on Facebook (SCWarriors), Twitter (@SterlingCSports), and Instagram (sterlingcsports), as well as the hashtag #SwordsUp. Watch the Warriors’ live home events on the Sterling College Sports Network.