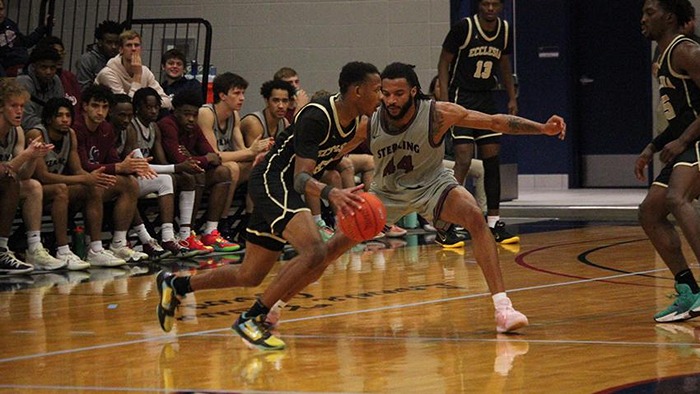 HILLSBORO, Kan.-The Sterling men’s basketball team took the familiar trip to Hillsboro, Kan. to the Tabor College Classic for a couple of non-conference games. Sterling went 1-1 over the weekend getting a win over Randall University, 85-69, and lost to Hastings College, 84-74, who remains undefeated on the season.

In the first game of the tournament for the Warriors, Sterling took Randall University. Sterling won the last contest between these two teams just a year ago in Sterling. The first have was back and forth for the first eleven minutes and then Sterling took over. The Warriors took the lead on a Lucas Briar 3-point shot that gave them a 24-23 lead. It was the fourth made three pointer in as many trips for Sterling, as they completed their comeback. From that point on, Sterling built a lead they would not relinquish. Over the final nine minutes of play in the first half, Sterling built a 15 point lead. At the break Sterling led 45-30.

Sterling was in control for the entire second half. Randall never got closer than 11 points and Sterling’s largest lead was 24 at one point in the second half. With the lead, several Warriors were able gain valuable minutes and contribute in many different ways.

Derrian Reed and DeAngelo Bell each had 14 points to lead the way for the Warriors. Will Thigpen had 9 rebounds and Sienion Dozier had 8 rebounds for the Sterling. As a team, Sterling outrebounded Randall 45-30.

The next game of the weekend was against a very tough, and undefeated, Hastings College team. Sterling did a great job of keeping themselves within arm’s length of the Mustangs. The Warriors spent most of the first half trailing by anywhere from five to nine points, spending a brief time down by twelve. Sterling was down just six at the half by a halftime score of 38-32.

Sterling stayed just as competitive in the second half never trailing by double figures. Lucas Briar, Cedric Rollerson and Will Thigpen helped to steady the course in the second half for the Warriors leading the offensive charge. Sterling’s best shot came midway through the half when Sienion Dozier hit a three to bring the lead to just three. In the end, Sterling wasn’t able to make that necessary push to cut the lead any more than that. Hastings hit 5 straight free throws in the last thirty seconds to take what was a 5 point lead and push it to 10 as time expired.

Rollerson led all scorers in the game with 20 points. He also added 3 rebounds and 2 assists. Derrian Reed was the leading rebounder for Sterling with 7 in the contest. As a team, Sterling shot well. They shot 45% from the field, 44% from three point range and 90% from the free throw line.

Sterling plays Newman University in an exhibition game on Wednesday night in Wichita, Kan. Gametime is set for 7 pm. Conference play starts Saturday Nov. 19 in Sterling when the Tabor College Bluejays come to town for a 7 pm start in the Gleason Center.