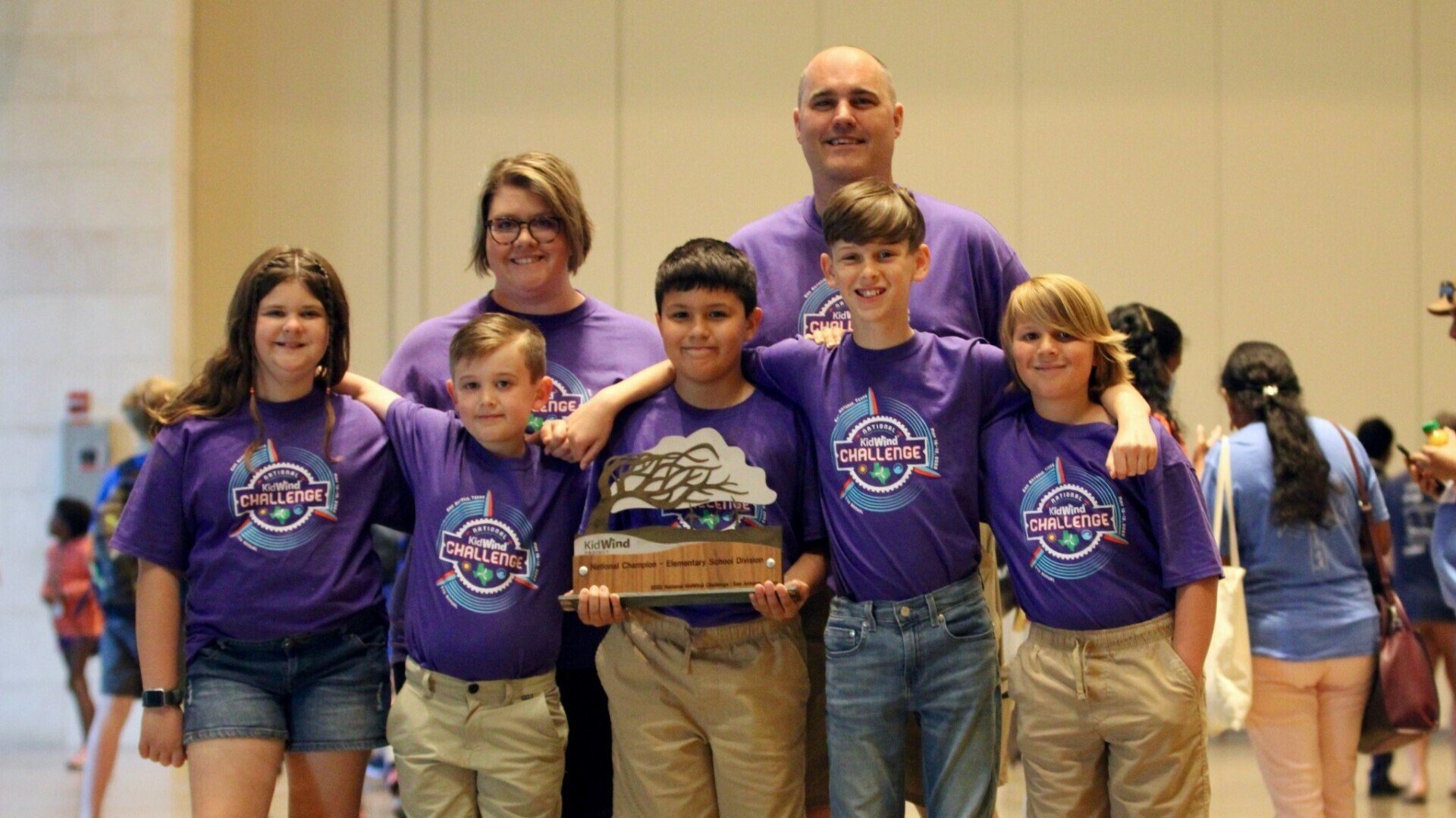 HUTCHINSON, KANSAS
– The Blue Team from Hutchinson STEM Magnet School at Allen has brought home the National Champion trophy from the KidWind competition.

The team of five students, Liam Clark, Gatlin Loepp, Kruz Hernandez, Zoey Schletzbaum, and Dalton Urban, along with two coaches, Keith Gable and Hannah Schletzbaum, traveled to San Antonio, Texas, to compete against more than 50 other teams in the Elementary Division of the National KidWind Challenge. The Hutch STEM Magnet team qualified for the national competition through a special invitation from the national coordinators after receiving the Judge’s Favorite award at the state competition in Topeka, Kansas in April.

The competition took place from May 16 to May 19, 2022, and consisted of various STEM challenges centering around wind energy. Several of the Blue Team’s challenges involved testing wind turbines with varying components such as solar energy, hydropower, and wind tunnels. Students were also quizzed on their STEM knowledge and understanding of the science behind wind turbines.

“The first day of the competition, we were busy from the beginning of the day to the end. On the second day, there was a special STEM Design Challenge with Johns Hopkins that the students had an opportunity to participate in, and we were smiling the entire time because it was exactly what we do here at Allen every day. We also tried to give the team additional learning opportunities through museum tours and experiences,” said coach Keith Gable.

“We were nervous and excited at the same time because it was a totally new experience. I liked doing the tunnel testing, and it felt very exciting and fun to talk to people and do the challenges,” said Dalton Urban, a fourth-grade competitor on the Blue Team.

One of the unique pieces of the experience was the opportunity to collaborate and learn from the college teams competing in the Collegiate Wind event happening at the same time as the KidWind Challenge. When preparing to compete at the regional level, Hutch STEM Magnet developed a relationship with the Kansas Energy Program through Kansas State University. While competing in San Antonio, the university competitors took time to mentor the elementary team and work with them on how to improve their results.

“The chance to work with college mentors was really amazing. We spent time with the K-State team and they took the time to show our students the parts of their turbine and gave each of our kids some 3D printed items that they weren’t going to use anymore, and even checked in with them later to give them advice. It was really cool, it was one of my favorite moments,” said assistant coach Hannah Schletzbaum.

“We were asking the K-State team if they had any tips for us on how to get more joules on our turbine, and they suggested changing the degrees on our blades, and that’s how we got our highest number,” said Zoey Schletzbaum, a fourth-grade competitor on the Blue Team.

The results of the competition were cumulative and affected the overall score given to the winning team. Although this was their first time participating in KidWind, and being one of the youngest competing teams at both Regionals and State, the Hutch STEM Blue Team received the National Champion title for the Elementary Division.

The Blue Team received support throughout their competition journey. From fundraising efforts to building celebrations, and even a police escort from the Hutchinson Police Department on their way out of town, encouragement for the KidWind competitors came from across the Hutchinson community.

“We had the pride and excitement of the whole school. We’ve been sharing the trophy with classrooms throughout the school because it’s just as much theirs as it is the team’s,” said Gable.

Though they have just returned from the national competition, Hutch STEM Magnet is already looking to their future plans for their school’s KidWind participation and hopes to inspire other USD 308 schools to send teams to the event. Next year the plan will be to hold a school-based competition with teams made up of fourth through sixth graders, and the top three teams will compete for their school at regionals.

“We want to start preparing much earlier now that we know the process of the competition,” said Hannah Schletzbaum.

The Blue Team documented their competition journey on a special Facebook page, which you can view here:

To learn more about the National KidWind Challenge, visit