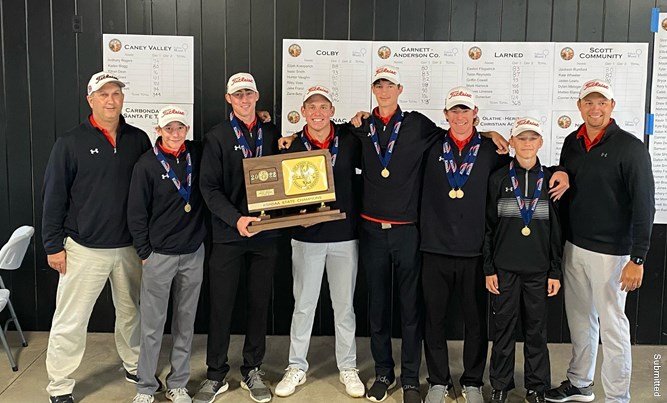 Hesston rode a pair of clutch performances to capture the Class 3A state championship by two shots over defending champion Santa Fe Trail.

KSHSAA Covered
SALINA –
Three-over through 12 holes, Hesston’s Camden Waterson was kind of at a breaking point during Monday’s opening round of the Class 3A state tournament.

But instead of worrying about how he was going to finish individually, Waterson turned his thoughts elsewhere.

“I had a three-hole stretch where I wasn’t doing very well and I wasn’t real happy with how I was playing,” Waterson said. “Then everything just kind of clicked. Before the round (Hesston coach) Grady (Pauls) pulled everyone together and said if anyone gets frustrated just think about doing it for the team not for yourself. So I was thinking about my teammates at that point and I knew they’d want me to keep playing my hardest.”
Waterson not only regrouped to stop the slide he was on, but got on a roll that played no small part in delivering Hesston its first state golf championship since 2005. The sophomore made birdies on four of his final five holes and the late surge helped the Swathers overtake defending champion Santa Fe Trail for the team title.

Hesston finished with a 319 total while Trail was two shots back at 321 and Olathe Heritage Christian was third with a 323. When heavy rains forced the cancellation of Tuesday’s second round, the Swathers were able to hoist the trophy.

“Once that first birdie fell, it really opened up the door for me,” Waterson said. “It feels really good knowing I was able to get done what I did over those last five holes and what it meant to the team.”
Waterson’s surge produced a 1-under 69 that left him just one shot behind Cheney’s Harrison Middleton individually. With both races so tight after the first day, Waterson admitted there were some mixed feelings when Tuesday’s round got canceled and the results from Monday’s round were the official final results.

“I was a little bummed personally,” he said. “Last time I played that course was in the rain and I did pretty well. Being only one back, I feel like I might be able to win it. I was hoping some of that would translate to today. But it is what it is and it feels great to win it as a team.”
Knowing the tournament could be reduced to a one-day scenario, Pauls delivered the same message he routinely preaches to his team each time they play.

“I just told the guys, ‘Go out and play as hard as you can,"” Pauls said. “I say that every tournament, but yesterday it had a little bit more of a meaning to it. It didn’t look good for Tuesday so it was play hard, don’t throw any shots away and try as hard as you can every single hole and good things will happen. And luckily it worked out for us.

“Obviously we wanted this thing to go two days, but weather didn’t allow for that. We’ll take it.”
While Waterson was the flashy hero for Hesston’s surge to the title, senior Ty Schroeder also delivered a performance that was just as clutch. A starter for the Swather boys’ basketball team that won the Class 3A state title in March, Schroeder came through once again.

Prior to regionals, he won a qualifier for the sixth and final spot on the postseason roster. On Monday, he came through with an 80 that tied him for 10th overall.

“That’s how you win state championships,” Pauls said. “You have guys step up at the right time and we did. It was pretty awesome.”
Hesston didn’t even qualify for the state tournament a year ago and its only state qualifier from the 2021 tournament graduated. But Pauls — a senior on Hesston’s 2005 state championship team — felt all season he had a squad capable of challenging.

The Swathers flew under the radar before stunning the field in Salina, also getting an 82 from senior Jace Regier and 88 from freshman Grant Waterson as its counting scores. Trail was led by a 72 and third-place finish from Lane Workman and got a 76 from Blake Buessing who tied for seventh, an 86 from freshman Ashton Frye and 87 from senior Ian Miesbach.

“Santa Fe Trail is a great team,” Pauls said. “I tried to embrace the underdog mentality with our guys. Nobody was talking about us. I knew we were a pretty solid team and play a tough schedule. Our stroke average, looking at the rankings, wasn’t a beautiful thing — it wasn’t bad — but I knew we had players. So it was, ‘Let’s go play golf and see what happens.’ Luckily for us we came out on top.”