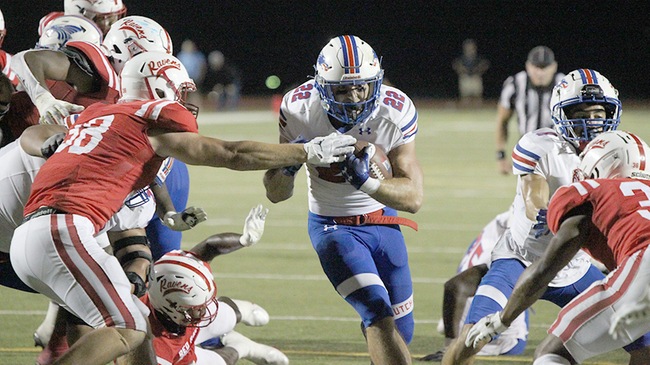 Dylan Kedzior bursts up the middle for a 3-yard go-ahead touchdown with 1:17 to play in the fourth quarter of No. 2 Hutchinson's 14-9 win on Saturday, Sept. 24 at Coffeyville. (Billy Watson/Blue Dragon Sports Information)

(KJCCC) – The NJCAA football season and national championship boils down to a final four of teams, and the KJCCC has two of those spots.

Top-seed and undefeated Hutchinson will host four-seed Coffeyville in one semifinal. The game will be at Hutch’s Gowans Stadium at 2 pm on Saturday, December 3.

“On behalf of the whole conference, I would like to congratulate #1-seed Hutchinson Community College and #4-seed Coffeyville Community College for outstanding football seasons,” said Carl Heinrich, KJCCCC commissioner. “We are so proud of them and the respect of the Jayhawk Conference has received getting two teams in the NJCAA football playoffs.”

While Hutchinson was at or near the top of the football ranking throughout the whole year, the Red Ravens had to work their way up the poll to reach No.4. Keys for Coffeyville included consecutive wins versus Butler in El Dorado and fellow playoff team Iowa Western on the road. The Blue Dragons are making their second national playoff appearance in the last three seasons.

Hutchinson came out on top 14-9 in their meeting with the Red Ravens in Coffeyville on Sept. 24. The hard-earned Blue Dragon victory was noted by Heinrich.

“It shows how powerful and competitive the conference is,” said Heinrich.  “It is a testimony to all the teams in our conference.  The Jayhawk Conference is an opportunity for all of our student athletes to play against the very best.”

The other NJCAA semifinal has Iowa Western headed to Senatobia MS to play Northwest Mississippi. Northwest ended the regular season at 10-1 and the #2-seed, and the Iowa Western Reivers finished as the three-seed. That game will be played on Sunday, Dec. 4 at 5 pm.

The semifinal winners will meet in the NJCAA Division I National Championship Game on Wednesday, December 14 at War Memorial Stadium in Little Rock, Arkansas. Heinrich expects to be in Little Rock that Wednesday.

“We wish the best to both of our teams as they play their way to the national championship game,” said Heinrich.

For more information on the conference, visit kjccc.org