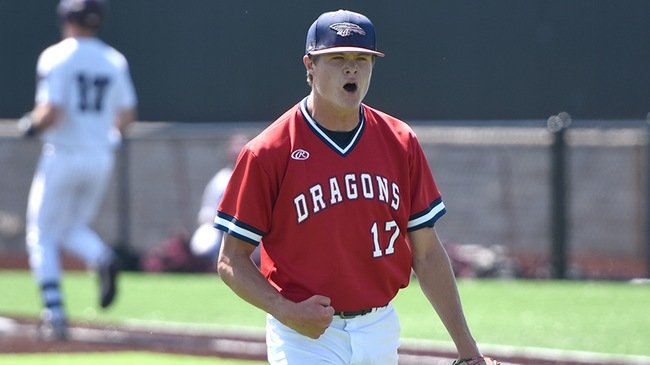 tossed a career-high 7 1-3 innings to power the Hutchinson Community College baseball team to a Region VI Opening-Round Series sweep of the Fort Scott Greyhounds on Thursday.

, the Blue Dragons defeated Fort Scott 10-2 in Game 2 to complete a sweep of the Greyhounds at Lions Field.

The Blue Dragons (36-21) advance to the eight-team double-elimination Central District Tournament, which begins Tuesday at Tointon Stadium on the campus of Kansas State University in Manhattan. The 10th-seeded Blue Dragons will play No. 2 seed and Jayhawk West champion Barton at 1 p.m. on Tuesday. Fort Scott ends its season 32-26.

The Blue Dragons extended their season-long winning streak to eight games with the opening-round sweep.

Torkelson walked the first Fort Scott batter he faced, but immediately erased that miscue with a line drive double play to

. After a second first-inning walk, Torkelson retired 11-straight Greyhounds and didn’t allow a hit until Blake Wilson’s one-out single in the fifth inning. Torkelson gave up single runs in the seventh and eighth innings.

The Blue Dragon starter improved to 5-4 on the mound this season with a career-best 7 1-3 innings. He allowed just four hits, all singles and struck out a career-high eight batters.

got the final five outs to finish the sweep.

Leading 1-0 after three innings, Logan smacked a three-run triple down the left-field line to take a 4-0 lead. Logan scored on a

sacrifice fly to left to build a 5-0 lead after four innings.

The Dragons built a 7-0 lead in the sixth with a bases-loaded walk to McLaughlin and Baker scoring on a Sutcliffe fielder’s choice.

After Fort Scott pulled within 7-2, the Blue Dragons scored three insurance runs in the ninth after a Baker sacrifice fly, a

RBI single and a McLaughlin ground-rule RBI double gave the Dragons a 10-2 lead.

Logan had another big offensive game to lead the Blue Dragons, going 2 for 3 with a double, triple, three runs and three RBIs. For the series, Logan went 5 for 7 with four RBIs.