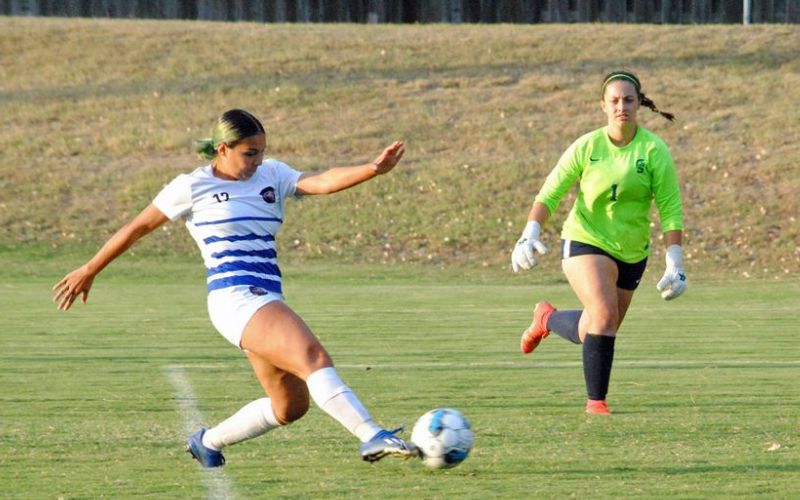 McPherson, Kan. – The Central Christian College women’s soccer team picked up their second win in a row, and moved a game above .500 with a 10-0 win over Randall University.

The Tiger goals came in bunches against the short-handed Randall University Saints, who had just 12 players on their rosters, but only 10 healthy bodies at the start of the contest. The Tigers scored five goals in each half to walk away with their fourth win of the season, and their second in as many games.

The Tigers got things started in the 4th minute when Kaitlynne Maldonado found herself with the ball wide open after a nice pass from Hanna Perez. Maldonado beat the keeper far post for her first of three goals on the day. Ten minutes later the Tigers struck again when Aliyah Moya scored on a pass from Avery Lemons. Less than a minute later they would add their third goal, when Perez found the back of the net off of a pass from Amaya Chaffee. Maldonado would pick up goal number two in the 17th minute, assisted by Amelia Needo. The fifth and final goal of the half came in the 19th minute off the foot of Amaleigh Mattison, assisted by Kayla McDonald.

After the intermission, the Tigers made a concerted effort to focus on possession rather than just pressing forward on the attack. Even with the change in mindset, the Tigers were still presented with numerous opportunities to put the ball on frame. They added five more goals in the second half, one from Maldonado, two more from Moya, one from Chaffee, and the other from Emma Bressler, who also picked up two assists.

Katelyn Beckman picked up her fourth win of the season, and her second clean sheet, between the pipes. She did not face a shot on goal from the Saints.

Coach Macharia summed up the Tigers’ performance saying, “On a chilly night it was good to have the game. Even though Randall did not offer the challenge we expected, we got to work on a lot of things that will help us to be better.

It was also good to have so many goal scorers from great creativity. Now we have a week to prepare for our first SAC game.

With the win, the Tigers move to 4-3 overall. They are slated to play Dallas Christian College on Saturday evening, but that game may not happen because of player numbers for Dallas Christian.

Tiger Men Suffer First Loss of the Season to Randall

Swedes Handle Business Against the Trojans

CC Tigers Fall on the Road to SCU & OCU