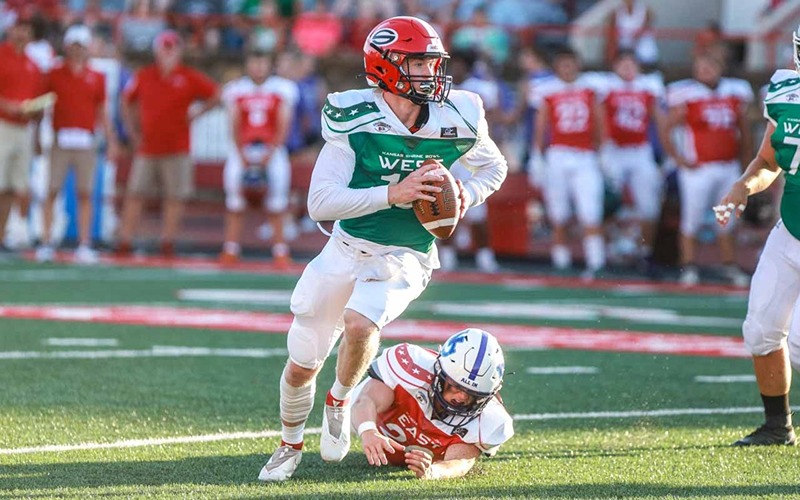 PITTSBURG, Kan. (KSHSAA Covered) — In a game that provided an ample amount of late-game fireworks, the 49th edition of the Kansas Shrine Bowl seemed to be missing the bang at the finish.East took its first lead midway through the final quarter, only for West to set itself up in scoring position in the final minutes of the contest. West ultimately settled for a 29-yard field goal from Dodge City’s Emanuel Aguilar, which he drilled through the uprights.With just 23 seconds remaining, East opted for two short plays and set its sight on overtime.The only problem is that this yearly all-star game does not have an overtime.“We didn’t know,” said Blake Reeder, Shawnee Mission Northwest and East team quarterback. “We asked the refs with about 10 seconds left. That’s why we ran it out. We were going to throw one down if we knew that, but we had no idea.”Instead, the Shrine Bowl ended in a 10-10 tie. It was just the second time that has happened in the last half century, the first being in 2001. The outcome ends West’s three-game winning streak in the series, although the East is still looking for its first win since a 21-14 victory in 2018.West dominated the field-position battle early in the game, largely thanks to interceptions by Junction City linebacker Keghan McConnell and Wichita Collegiate defensive back Ashtun Villagomez. The latter takeaway set up the first score of the game.“That second interception was a big boost for us,” Sedgwick quarterback Lance Hoffsomer said. “They are a passing team and getting that second interception was awesome. I knew when I was going out on the field, we just had to punch this one in.”Hoffsomer made sure his team accomplished just that.

With the opposing defense smothering his targets down the field, the Emporia State commit opted to take off down the right sideline. Hoffsomer did not slow down until he found the end zone for a 20-yard rushing touchdown and a 7-0 lead.“It just meant the world to me,” Hoffsomer said. “It’s the Shrine Bowl and everyone wants to score in the Shrine Bowl. It’s such a big game.”Scoring a touchdown was also a rare occurrence in this one. Both offenses had a tough time crossing the goal line the rest of the way. East continued chasing that elusive touchdown until midway through the fourth quarter. Reeder, an Butler County CC commit, led his offense on a 10-play, 58-yard scoring drive. Even that possession would have stalled out if not for Reeder’s running ability on a roll-out play during a 4th-and-4 attempt. He corkscrewed his way through a sea of defenders before stretching the ball out to reach the first-down marker.“I saw about three yards and we need four, so I just put my head down and see what happens when I got up,” Reeder said. “I got the first.”East kept pushing its way toward the end zone until Basehor-Linwood running back Zack Sisemore finally broke through. Sisemore bullied past a would-be tackler before diving over the goal line for a 7-yard rushing touchdown.“I pressed the double team and I just saw an opening lane on the outside,” Sisemore said. “One of the lineman just sealed the end off perfectly and I ran it in.”Sisemore said that despite East having a tough time scoring points for the first three quarters, the team remained positive throughout the contest. East used that to pull itself ahead late, and nearly sealed the victory by forcing a turnover on downs near midfield during West’s next possession.

But West returned the favor with its own fourth-down stop. Southeast of Saline linebacker Matthew Rodriguez made a tackle in the backfield on a fourth-down run attempt. That set up one final drive.After getting some help moving the ball down the field with a defensive pass interference, West pulled out some trickery to quickly get into scoring position. The team ran a double-reverse pass with Cheney’s Harrison Voth finding Bishop Carroll’s Matt Holthusen for a 24-yard strike down the field.West took some strikes at the end zone, but ultimately chose to go for the tie by sending out Aguilar for the field goal.Aguilar also might be the reason his team had a chance to tie in the first place. In the third quarter, a fourth-down snap went sailing over his head and headed toward the team’s goal line. Aguilar made a quick decision to kick the ball out the back of the end zone for a safety, denying East the chance to start an offensive possession inside the 5-yard line. Aguilar followed up with an 80-yard bomb on the free kick to put East on its own 20-yard line, still trailing 7-2 at that point.

Despite the quick thinking and the game-tying field goal, Aguilar’s teammate Braxton Harrison received the West’s MVP award for the game. The Cimarron defensive back led his team with nine tackles while also earning a pass breakup. Reeder took home the East MVP honors after completing 15 of his 25 passes for 192 yards.Neither team liked the idea of finishing in a tie, but most of the players walked away feeling like the event produced some great memories of their last high school football game.Hoffsommer said it hurts to end in a tie, but he understood why a charity all-star game would allow for a game to end knotted up at the end of regulation.“I’d rather win, but it’s not a loss either,” Hoffsomer said. “This is for the kids. The hospital experience just touched my heart with that.”All proceeds from the Shrine Bowl events goes towards the Shriners Children’s, a non-profit organization that supports pediatric care. For the 50th edition of the Kansas Shrine Bowl, the game will return to Hays on July 15, 2023. It will be the fifth time Hays has hosted and the first since 2015.