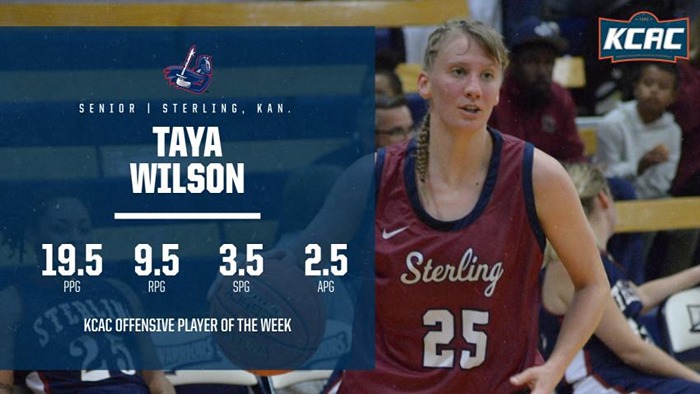 WICHITA, Kan. — Taya Wilson of No. 13 Sterling College and Taylor Jackson of Friends University have earned the KCAC Women’s Basketball Offensive and Defensive Player of the Week honors, respectively, the conference office announced Monday. The two student-athletes were selected for their performances from Nov. 7-13 by a vote of conference sports information directors.

Wilson owned both ends of the court last weekend. Offensively, she led the high-powered Warrior offense scoring almost 20 p/g (23 against [RV] Benedictine). Over the weekend, she led the team in scoring, assists, rebounds, steals, and had fewer turnovers than all but one of Sterling’s starters. She was the epitome of efficiency. Add that to her 50% shooting from the field and 93% from the free throw line, and Taya put in a complete performance last week. This is the second consecutive week in which Wilson has earned a KCAC Women’s Basketball weekly honor, as she was the conference’s Defensive Player of the Week last week.

Jackson had another big week as a difference maker along the interior for the Friends University Falcons. Jackson averaged five defensive rebounds and 4.5 blocks in the Falcons’ two games over the weekend, highlighted by a seven defensive board and six block effort in an 80-59 rout over Oklahoma City University Saturday (Nov. 12). Jackson set the Falcons’ modern era single-season blocks record (96) last season and is tops in the KCAC this season in blocks per game (3.6) and fourth in defensive rebounds per game (6.0).