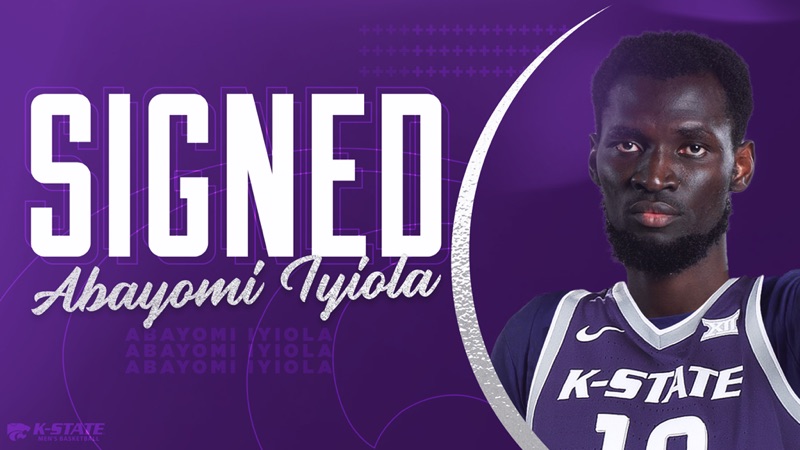 MANHATTAN, Kan. – Kansas State head coach Jerome Tang continued the process of building his first team on Friday morning (June 24) with the signing of graduate transfer Abayomi “Baybe” Iyiola (Pronounced uh-BYE-uh-mee ee-zhee-OH-luh) to a Financial Aid Agreement with the program for the 2022-23 season.

Iyiola is the seventh player to sign with the Wildcats since Tang was introduced as the program’s head coach on March 21, including the fifth Division I transfer following Cam Carter (Mississippi State), Jerrell Colbert (LSU), David N’Guessan (Virginia Tech) and Desi Sills (Arkansas/Arkansas State). Overall, Iyiola is the eighth newcomer added to the team for the 2022-23 season.

Iyiola also has experience playing at both Stetson (2017-19) and Arkansas (2019-21), although he played in just one game as a Razorback due to injury. At Stetson, he was a member of the 2018 Atlantic Sun (ASUN) All-Freshman Team, leading the team and ranking eighth in the league in rebounding (6.2 rpg.). He would play in 63 games with 39 starts as a Hatter, averaging 10.4 points on 50.1 percent shooting with 6.9 rebounds in 21 minutes per game.

Overall, Iyiola has logged 92 games of experience at the Division I level, including 64 starts, while totaling nearly 2,000 minutes played for a 20.5 per game average.

“Baybe is another great addition to our team and exactly the type of player we are looking to attract to K-State,” said Tang. “We needed experience and more depth in the low post, and he gives us both. He has seen significant action in college, including playing major minutes in his first two seasons at Stetson. He really rebounded from injury (at Arkansas) to have a solid year at Hofstra. He is a talented player with 16 double-doubles to his credit.”

“Most of all, Baybe continues our emphasis on guys who are winners. He won two state championships in high school, was part of a special team at Arkansas along with Desi (Sills) and won 21 games a year ago at Hofstra. He knows what it takes to be successful. We are excited to get him here and introduce him to Wildcat Nation!”

Iyiola will have one year of eligibility remaining after the NCAA granted Fall 2020 and Winter 2021 sport student-athletes an additional year due to the COVID-19 pandemic. He recently completed his bachelor’s degree in management from Hofstra in May 2022.

Iyiola scored in double figures in seven games for the Pride, including a season-high of 18 points on 7-of-11 shooting in the win at Arkansas on December 18, 2021. He also registered 4 double-doubles and secured double-digit rebounds 8 times. He grabbed a season-high 15 rebounds (to go with 15 points) in a win at James Madison on January 9 to cap a stretch of five consecutive games with double-digit rebounds.

Prior to Hofstra, Iyiola spent two seasons (2019-21) at Arkansas playing for head coach Eric Musselman. After sitting out the 2019-20 season due to NCAA transfer rules, he played in just one game for the Razorbacks due to knee surgery. He did not start practicing with the team until December 26, 2020, as he dressed for his first game against Florida on February 16, 2021, before grabbing a rebound in 2 minutes at South Carolina on March 2, 2021.

Iyiola played alongside recent addition Desi Sills in both seasons at Arkansas, where the pair helped the Razorbacks win 45 games and advance to the Elite Eight in 2020-21.

Iyiola was named to the Atlantic Sun Conference (ASUN) All-Freshman Team in 2017-18, as he averaged 10.1 points on 51.9 percent (139-of-268) shooting with a team-leading 6.2 rebounds in 19.2 minutes per game. He ranked seventh in the ASUN in field goal percentage and eighth in rebounding. His scoring average ranked third on the team, while his 322 total points placed seventh among Stetson freshmen all-time. In all, he played in all 32 games with 8 starts, scoring in double figures 18 times and registering 4 double-doubles. He posted a double-double in his first collegiate game with 21 points and 13 rebounds vs. Webber on November 10, 2017.

His best season at Stetson came as a sophomore in 2018-19, in which he led the Hatters in scoring (10.8 ppg.), rebounding (7.6 rpg.) and blocked shots (1.2 bpg.) while starting all 31 games. He ranked fourth in the ASUN in rebounding, while he was second offensive rebounds (2.74) and fifth in blocks. He posted 8 double-doubles, while scoring in double figures 15 times and reaching double-digit in rebounds 10 times. In addition to his career-high 26 points at South Florida, he posted 22 points and 11 rebounds at Western Illinois on December 5, 2018.

The Nigerian national played for Greenforest-McCalep Christian Academy in Decatur, Georgia, guiding the Eagles to a 57-7 overall record and back-to-back Class A Private School State Championships. As a senior in 2016-17, he nearly averaged a double-double with 10.2 points, 9.5 rebounds and 2.5 blocks per game for a Greenforest squad that won 27 games and won their four playoff games by an average of nearly 30 points per game.

Season tickets for the 2022-23 home schedule at Bramlage Coliseum are currently on sale.