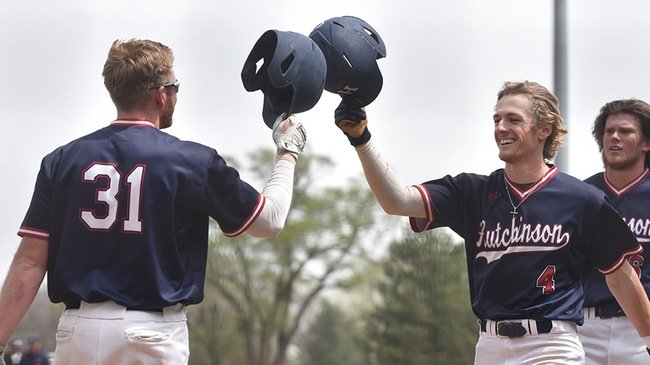 Sterling Sutcliffe (4) is congratulated by teammate Jon Jenkins after his third home run of Game 1 vs. Colby on Saturday at Hobart-Detter Field. Sutcliffe is the fourth Blue Dragon in history to have a three-home run game, doing so in a 10-6 win. (Sammi Carpenter/Blue Dragon Sports Information)


became the fourth Blue Dragon in program history to hit three home runs in one game on Saturday at Hobart-Detter Field.

Sutcliffe’s three-homer game powered the Blue Dragons to a 10-6 victory over Colby in the first game of a KJCCC doubleheader. Sutcliffe homered again in the second game, but the Blue Dragons fell in the series finale 14-13 in 10 innings, splitting the four-game set with the Trojans, 2-2.

Sutcliffe was 3 for 4 with career highs of three home runs and eight RBIs in Game 1 Saturday. Sutcliffe homered in his first three at-bats. The sophomore right-fielder hit a two-run homer in the first inning and had three-run blasts in the third and fourth innings, respectively.

(2021 vs. Pratt) as Blue Dragon players with three home runs in a single game.

The eight RBIs is the second most in Blue Dragon single-game history, only behind McLaughlin’s nine RBIs against Pratt last season.

For the doubleheader, Sutcliffe was 5 for 10 with four home runs and 11 RBIs. Sutcliffe took over the team lead in home runs with 14 for the season, which ties Jordan Robison (1999) for 10th place on the Blue Dragon single-season home run list.

The Blue Dragons out-hit Colby 10-6 with their second game this season of five or more home runs.

was 2 for 3 for the Blue Dragons. McLaughlin was 1 for 3 with a double.

(3-4) was the winning pitcher for the Blue Dragons. He tossed five-plus innings, allowing seven hits and five runs with three strikeouts and a walk.

struck out four in two innings.

Colby had three home runs in the game.


GAME 2 RECAP
The Blue Dragons rallied from 9-1 deficit and took a 10-9 lead after a Sutcliffe three-run home run in the fifth inning.

Hutchinson grew its lead to 13-9, but Colby rallied with three unearned runs in the top of the ninth to tie the game at 13-all.

Shortstop Johnny Vulcano led off the 10th with a solo home run for a 14-13 Colby lead. The Blue Dragons put two baserunners on in the bottom of the 10th, but the game ended on a 4-6-2 double play with the potential tying run getting cut down at the plate to end the game.

Hits were tied 15-15 and there were a combined seven home runs in the second game.

Sommer led the Blue Dragons going 3 for 6 with a run scored and an RBI. Henderson was 2 for 5 with a double.

The Blue Dragons struck out a season-high 16 times and left 13 runners on base.

(1-1) was the losing pitcher for the Blue Dragons. He gave up the 10th-inning leadoff homer to Vulcano that gave Colby its 14-13 lead.

After falling behind 9-1, the Blue Dragons scored five runs in the third, a single run in the fourth and had back-to-back three-run innings in the fifth and sixth.

The Dragons were unable to score in the final four at-bats of the game.