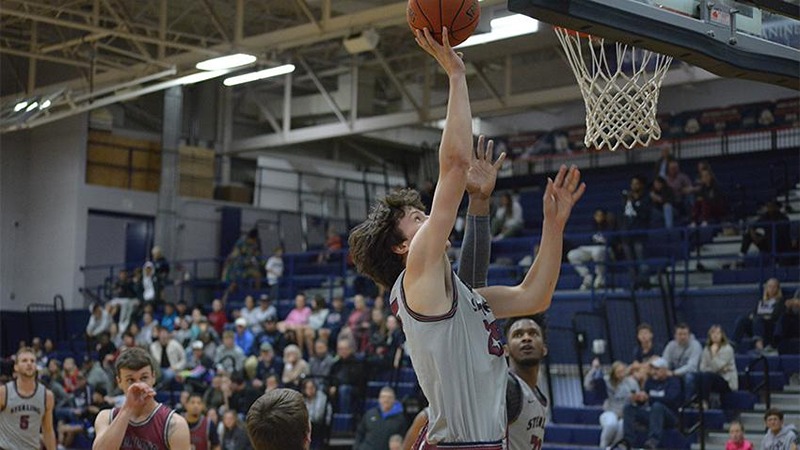 Olathe, Kan.- New men’s basketball Head Coach Randy Stange has been preparing his team since last spring for the transformation of a struggling basketball team. The men’s basketball team has been on a skid for several years and Stange and his current players are looking to fight their way out of it. Sterling showed a lot of grit and determination in their 1-1 start. They ended up taking the loss to MidAmerica Nazarene, 94-83 and squeaked out a 78-71 win over Evangel University, a future member of the KCAC.

Last weekend was a glimpse into what Warrior fans are hoping will become a trend; competing with top NAIA teams. Sterling opened their season at the Jeff Uphause Classic at MidAmerica Nazarene University Friday night. It was a slow start for the Warriors as they found themselves down 20 points at the half. The Pioneers started the game by scoring the first 14 points. From that point on until halftime, Sterling was only outscored by 6 points. Halftime in Olathe, it was 50-30.

Sterling started to chip away at the Pioneer lead taking the 20 point lead and making it just 10 by the 13 minute mark. Over a 10 minute span in the second half, Sterling outscored MNU 36-18 cutting the lead just 2 points at 72-70. There was plenty of time left in the game with 7:30 left on the clock. 7 different Warriors contributed in scoring during the run, 6 of which scored multiple goals. Over the last 7 minutes, MNU was able to slowly pull the lead back up to a slightly more comfortable margin, eventually coming away with an 11 point win. Sterling fell in an early season tough road battle, 94-83.

Derrian Reed led the stat line with 19 points and had 8 rebounds, 6 assists, and 3 steals. Junior transfer, Cedric Rollerson from Allen Community College, tallied 17 points. Elias Ngoga, a sophomore transfer from Blinn College, and Will Thigpen, a junior transfer from Yellowstone Christian College, each had 11 points; Ngoga grabbed 9 rebounds as well.

The second game of the weekend ended in the Warrior’s favor. Sterling picked up where they left off the night before running score for score with the higher-ranked Evangel Valor. Sterling’s defense picked up in the last 12 minutes turning a one point deficit into a nine point halftime lead, 42-33.

Over the first thirteen minutes of the second half, Sterling took the nine point lead and pushed it to 22. Sterling looked to have the game well in hand with a 72-50 lead. With just under 8 minutes to play, Sterling started to work the clock, but also ended up with empty possessions. Increased defensive pressure by the Valor turned the 22 point lead into just 3 with 20 seconds remaining in the game. Evangel went on a 21-2 run in the stretch. With the shot clock off, Evangel was forced to foul and Sterling made their free throws. The final tally was 78-71 in favor of the Warriors. It was Sterling’s first win since November 10th last season.

Lucas Briar led the charge with 19 points and 9 rebounds. Cedric Rollerson had another stand out game scoring 14 points, 5 rebounds and 6 assists. Eleven of his points came from the free throw line.

Sterling plays an exhibition game against Oklahoma Christian University in Edmond, Okla. on Saturday, Nov. 5, at 3 pm before returning home for a nonconference game against Ecclesia College in Sterling at 7 pm on Nov. 8th.