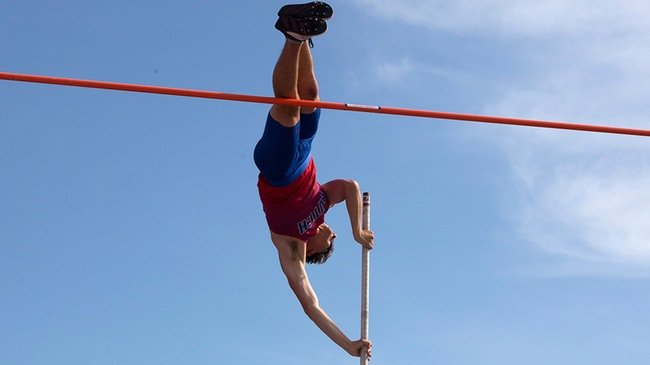 Simon Steinert
entered the 2022 NJCAA Division I Outdoor Track and Field Championships ranked ninth in the nation in the men’s pole vault.

He left Gowans Stadium on Thursday evening reaching the podium after placing eighth in the pole vault.

Steinert was the only Blue Dragon to score points on Day 1 of the 2022 Championships. The Dragons had four entries going on Day 1. The Blue Dragons are tied for 22nd after the first of three days of competition.

Steinert cleared 13 feet, 11.75 inches on his first attempt Thursday at the Blue Dragons home stadium, but missed on all three chances at 14 feet, 5.5 inches, which would have been a personal record.

Dimetre Browne
just missed the men’s long jump finals with a 10-place performance on Thursday. Fourth after the first flight, Browne posted a personal record of 23 feet, 9 inches, the seventh best jump by a Blue Dragon at a national championship event in team history.

Browne also ran the leadoff leg of the Blue Dragons’ 4×100-meter relay team that finished 13th in Thursday’s preliminary round. The team of Browne,

The only other Blue Dragon to compete on Thursday was hurdler

Sharim Hamilton
, who finished 19th in the 400-meter hurdle preliminaries with a time of 55.60 seconds.

The Blue Dragons have five entries going at the NJCAA Championships on Friday.

Ranked sixth in the NJCAA coming into the Championships, sophomore

Antonio Cooper
will compete in the shot put at 11 a.m.

Jayhawks Qualify for NCAA Championships After Strong Showing at Regionals