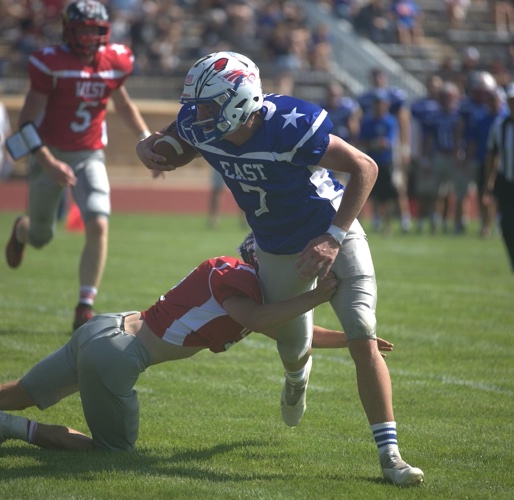 BELOIT — Brec Long was initially slated to play defense for the East squad in the Kansas 8-Man Division I All-Star Game.

After two practices, East head coach Shelby Hoppes was convinced the ball needed to be in the hands of the Sedan standout and Missouri Southern signee.

Long was moved to quarterback for the East, a decision that resulted in one of the most impressive offensive performances in the history of the 8-Man All-Star Games.

Long ran for six touchdowns and 242 yards on 24 carries for the East, which scored the game’s first 42 points en route to a 54-30 win over the West on Saturday at Trojan Field.

“I knew he was a special athlete, but I didn’t know he was that good,” Hoppes said. “That was a show he put on.”

The 6-foot-4, 200 pounder showed off power and agility, breaking several tackles on his last touchdown run of the day.

“I’ll run you over, or I’ll try to anyway, I’ll juke, and on top of that, I like throwing the ball every once in a while, too,” Long said.

“I had a few other schools (interested), but whenever I went over there (to Southern) it just felt like home,” said Long, who will play outside linebacker. “I got over there and liked the coaches, liked the facility. We have a whole new coaching staff over there, so it seems like they’re fixing to turn some things around.”

After Doniphan West’s Trent Spiker put the East on the board with a 2-yard run, the East cashed in on the first of five turnovers it forced on the day. West Elk’s Wesley Young recovered a fumble at the West 2 to set up Long’s first touchdown. Interceptions by Clifton-Clyde’s Tee Koch and Madison/Hamilton’s Drew Stutesman also set up touchdowns during a dominant first half for the East.

The West regrouped after halftime, outscoring the East 30-18 in the second half. Hoxie quarterback Ashton Dowell threw a 53-yard touchdown pass to Hill City’s Derek Keith and a 65-yard TD to WaKeeney-Trego’s Cole Feldt. Dowell also ran for a 7-yard score, and Feldt scored on a 35-yard interception return.

“We were fortunate to get that big lead, but eventually the defense is going to catch up, and they did,” Hoppes said. “They got some stops and some big plays, but when we needed it we were able to move the football and go score, then get stops when we needed them. Proud of the kids for doing that.”

Spiker had two touchdown runs and Solomon’s Dylan Hynes rushed for 98 yards including a 50-yard TD.

Hoppes credited the offensive and defensive lines for helping pave the way.

“We had great size, great speed,” Hoppes said. “Those big boys have some feet. We had the three Little River boys in the middle on the offensive side (Kaden Schafer, Carter Holloway and Kyle Bruce), and I know very well how good they are, coached against them twice this season. They paved the way on the offensive side. Then on the defensive side, we had 6-6 (Young) on one side and 6-8 (Burlingame’s Trever Quaney) on the other side, and that makes things tough. A lot of size in the trenches, but not just size, a lot of speed and really good feet.”

“This was one the funnest weeks I’ve ever had,” he said. “When you bring them together, they’re arch rivals. They play on Friday nights against each other for a chance to go to a state championship. Here we come, and we bring them together, and we get four days, and they gelled from Day 1 and had energy from Day 1.

“One of the best groups I’ve been around.”