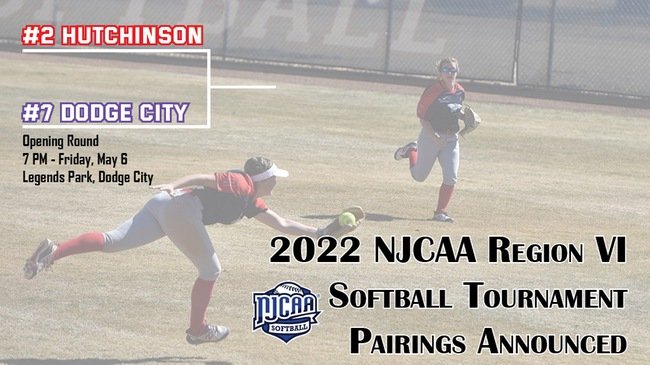 DODGE CITY –
The No. 15-ranked Hutchinson Community College softball team earned the No. 2 overall seed for the 2022 NJCAA Division I Region VI Tournament, which begins on Friday at Legends Park in Dodge City.

The Blue Dragons (38-6) will play seventh-seeded Dodge City (20-26) in the opening round in the eight-team, double-elimination tournament. Hutchinson and Dodge City are scheduled for a 7 p.m. first pitch, the fourth of four opening-round games on Friday.

Tickets are $8 daily when you pre-purchase at

Tickets will be $10 daily at the Gate. Legends Park is located at 600 West Ross Boulevard in Dodge City. All tournament games will be streamed live on the KJCCC Network.

The Blue Dragons posted their second-straight second-place conference finish this season, amassing a program record for conference wins with a 29-3 record. The Dragons finished only one game behind league champion and tournament top seed Butler.

The Blue Dragons won a pair of slugfests with the Conquistadors on March 13 at Legends Park, winning 10-9 and 10-7. The Blue Dragons in the first game of that doubleheader trailed by three runs entering the seventh, but rallied with a game-tying two-run double from

Allie Stipsits
and a go-ahead two-run home run from

Aspen Goetz
in the final at-bat for the win.

Then on April 13 at Fun Valley,

The Blue Dragons and Conquistadors are on the bottom part of the bracket with No. 3 Colby (34-18) and No. 6 Seward County (23-25). The Trojans and Saints play at 5 p.m. on Friday. The winners of those contests will play on Field 2 at Noon on Saturday. The losing teams will square off in an elimination game on Field 2 at 10 a.m. on Saturday.