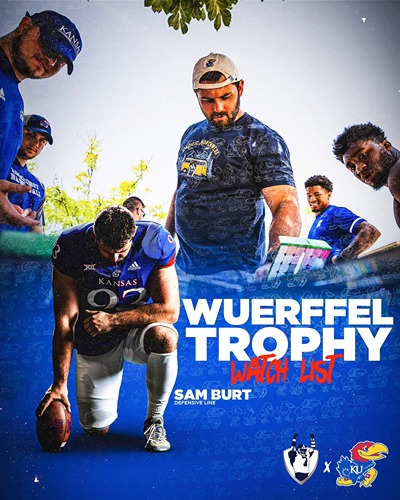 Named after Danny Wuerffel, the 1996 Heisman Trophy-winning quarterback from the University of Florida, the Wuerffel Trophy is presented each February in Fort Walton Beach, Florida. The trophy honors college football players who serve others, celebrate their positive impact on society and inspire greater service in the world.

Burt, of Abilene, Kansas, has been a mainstay on the Kansas defensive line, playing in 45 career games for the Jayhawks, while starting in nine. Off the field, Burt is a three-time Academic All-Big 12 First Team member, Big 12 Commissioner’s Honor Roll and Athletic Director’s Honor Roll, while also being involved in the Lawrence community.

Burt was recently nominated for the AllState AFCA Good Works Team on July 21, recognizing student-athletes around the country for exemplary community service, academic dedication, and impact on and off the field.

The formal announcement of the 2022 recipient is scheduled to be made on December 8, and the presentation of the 2022 Wuerffel Trophy will occur on February 24, 2023.

ABOUT THE WUERFFEL TROPHY

Established in 2005, the Wuerffel Trophy honors college football players who serve others, celebrate their impact, and inspire greater service in the world.  A member of the National College Football Awards Association, the Wuerffel Trophy is presented annually to the FBS player who best combines exemplary community service with leadership achievement on and off the field.  It is the first major award honoring the character of service to others.

The Wuerffel Trophy is named after Heisman Trophy winner, College Football Hall of Famer, former NFL quarterback, and renowned humanitarian Danny Wuerffel, whose life mission is to inspire greater service in the world. Wuerffel led the University of Florida to four SEC Championships and the Gators’ first National Football Championship as the team’s star quarterback. The 1996 Heisman Trophy winner set 17 NCAA and Florida records and won a myriad of other awards including the Maxwell Award, the Davey O’Brien Award, and The William V. Campbell Trophy, presented to the nation’s top scholar-athlete. As a nationally recognized humanitarian, Wuerffel inspires leaders to use their influence to make a positive impact and currently serves as President of the Wuerffel Foundation.