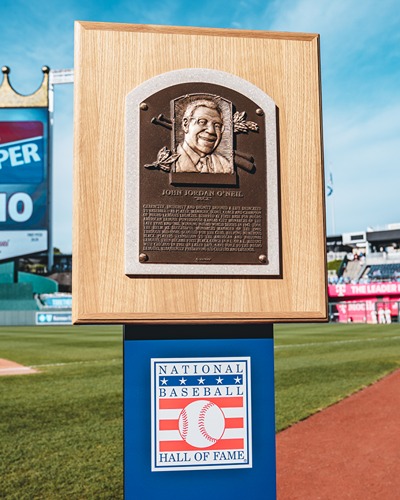 KANSAS CITY (MLB.com/Royals) – When the Royals took the field for Saturday night’s game against the Dodgers at Kauffman Stadium, they donned red and white uniforms instead of their typical blue, with Monarchs splashed across the chest of their jerseys instead of Royals.

It was the annual Salute to the Negro Leagues game, with the Royals (1945 Monarchs) and Dodgers (1955 Brooklyn Dodgers) wearing throwback uniforms that Jackie Robinson would have worn.

That was just part of the festivities held throughout a special day at The K.

Buck O’Neil’s Hall of Fame plaque was on display, celebrating the longtime player, coach, scout and contributor to the Negro Leagues legacy after his induction last month in Cooperstown.

• Dodgers’ visit to NLBM a home run with players

The timing of the gesture worked out, so soon after O’Neil’s induction and the Salute to the Negro Leagues game, but it was also extremely rare to see a plaque outside the hallowed halls of the National Baseball Hall of Fame at all.

“In the life of a plaque, odds are, it might leave Cooperstown once, maybe never,” said Jon Shestakofsky, the Hall of Fame’s vice president of communications and education. ”This could potentially be the only time that Buck O’Neil’s plaque leaves Cooperstown.

“I think it’s a very meaningful moment because the induction is still fresh on everyone’s minds, so to have the plaque come out here at this time, it keeps that connection tight, bottling up a little bit of that magic of what happened in Cooperstown a few years ago and bringing it to Kansas City.”

A day after being displayed at the Negro Leagues Baseball Museum in Kansas City — the place O’Neil helped found in 1990 in hopes of keeping stories and legacies of the Negro Leagues alive — the plaque traveled around Kauffman Stadium. It made a trip to both clubhouses, where NLBM president Bob Kendrick shared information about O’Neil, the Negro Leagues and why the teams were wearing the throwback jerseys.

“I don’t think it’s lost on any of them how unique and special this day is,” Kendrick said. “Obviously, for the Dodgers’ organization, what Jackie Robinson meant, but it’s also important that people here in Kansas City understand what Jackie meant, too, because it doesn’t happen without Kansas City.

“I don’t think that message was lost on either of those locker rooms. And it made this weekend celebration even more special for them to learn a little bit about the life and legacy of Buck O’Neil and what his Hall of Fame induction means not only to Kansas City, but to the baseball world.”

The plaque went to the field for a pregame ceremony and then to the Royals Hall of Fame, free for the public to see throughout the game before it travels back to Cooperstown on Sunday.

“Buck was part of our family for a while [as a scout], and now he’s part of every single game that’s played in this ballpark with the Buck O’Neil Legacy Seat [behind home plate],” Royals Hall of Fame director Curt Nelson said. “So we feel a strong connection to him. To be able to bring him home in this particular instance is an emotional and fulfilling thing to do.”

That was the feeling of so many who walked through the doors of the NLBM on Friday or the Royals Hall of Fame on Saturday — or both — to see the plaque. It’s exciting to see history, but it’s also a symbol of what O’Neil means to the NLBM and to Kansas City.