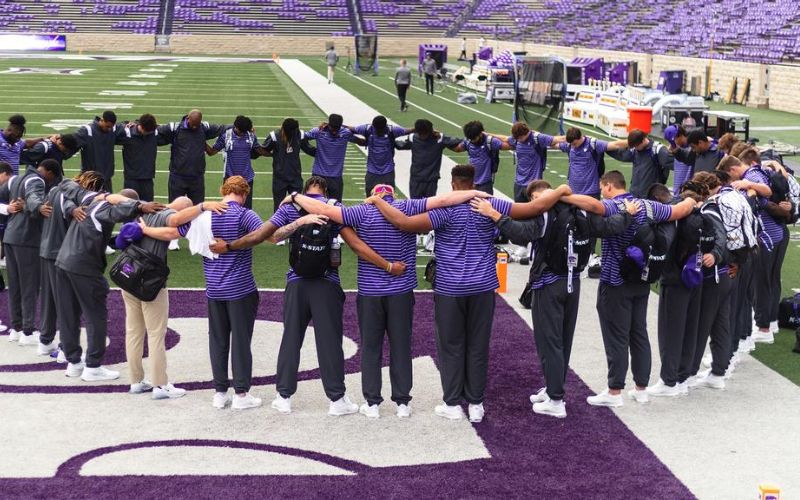 MANHATTAN, Kan. – Kansas State saw the seemingly unthinkable turn to fruition in a 17-10 home loss to Tulane. The Wildcats have turned the page and head coach Chris Klieman says “it’s not panic time.”

When K-State, 2-1, opens the Big 12 Conference season at No. 6 Oklahoma, 3-0, in Saturday’s 7 p.m. kickoff on FOX, Klieman will look for improvement from his team across the board.

“We’re only three games into it, but we know it’s a time for us to improve in all areas, so I’m excited to see how the guys respond to adversity,” Klieman said in his weekly news conference. “We talked about the adversity we’re facing, and we’ve faced it before. These guys need to attack it. We have the right leadership and right guys in the locker room to get it done. We just have to get better and continue to improve.”

K-State has won two of the last three meetings against Oklahoma. K-State beat Oklahoma 48-41 in Manhattan in 2019 and 38-35 in Norman in 2020 before the Sooners prevailed 37-31 last season at Bill Snyder Family Stadium.

Since 1999, Oklahoma has won more Big 12 Championships (14) than it has suffered home losses (11), but three of those defeats came at the hands of the Wildcats, who suggest they’ve rinsed away Tulane and are eager for the challenge in Norman.

“As you can see from last week, anybody can beat anybody,” K-State running back Deuce Vaughn said. “Going into this game, we understand the preparation and work we put in throughout the week, and how we go about our business can’t change. If anything, it has to be better. We have to give ourselves the best chance to be successful on Saturday and then go and execute.”
Klieman believes that the Wildcats can execute better on offense, defense and in special teams.

“Reviewing the film (from the loss), I really thought we had a good week of preparation,” Klieman said. “Talking to the leaders and captains yesterday, they thought that as well. Obviously, there are always a few things you wish you could do a little bit better Monday through Friday, but the bottom line is we didn’t execute well enough really in all three phases.”

That resonates among players.

“We really missed on some opportunities collectively and individually and a lot we can learn from,” K-State quarterback Adrian Martinez said. “The sky’s not falling, all of our goals and aspirations are still on the horizon for us, and this team is confident going into this week.”

This will mark the first Big 12 game for Brent Venables as a head coach. The former K-State player and assistant coach became Oklahoma head coach on December 5 after masterminding Clemson’s powerful defenses for 10 years. Venables returned to Norman after serving under Bob Stoops from 1999 to 2011.

“I have a tremendous amount of respect for Brent,” Klieman said. “He’s a phenomenal football coach and a great human being. I’ve had a chance to be around him a number of times. It’s a credit to him to wait around for the right opportunity. He had plenty of opportunities when he was at Clemson under Dabo (Swinney) but he waited around for the right opportunity and he’s in a great situation.”

Although Oklahoma averages 42.3 points and K-State averages 28.0, this could end up being a defensive battle, as both defenses rank in the top 15 in scoring defense. K-State ranks 12th in surrendering 9.7 points per contest and Oklahoma ranks 14th in giving up 10.0.

Neither team has allowed an opponent to score more than 17 points.

K-State players are preparing to bounce back after a tough loss.

“Losing anytime is bad, but I think after a loss it does make you reflect and think, ‘What could I have done differently?’ and ‘What do I need to do differently?"” K-State nose guard Eli Huggins said. “I think guys are already attacking this week harder than we have any week previously. You have to do more after a loss. Obviously, what you did was not enough, so everyone has to pick it up a little bit.”

Klieman wants Adrian Martinez to be himself

With Thompson now with the Miami Dolphins, senior transfer Adrian Martinez has taken the reins of an offense overseen by first-year offensive coordinator Collin Klein. Saturday will mark Martinez’s first road test with the Wildcats. Martinez, the record-setter from Nebraska, threw for 289 yards and one touchdown and one interception in the Huskers’ 23-16 loss at No. 3 Oklahoma last season.

So far, Martinez has completed 41 of 66 passes for 304 yards and one touchdown and no interceptions through three games while adding 150 rushing yards on 39 carries and two scores on the ground.

“He’s in a new environment and let’s not forget he’s replacing a guy that was a pretty dang good player in Skylar Thompson, and that’s probably not the easiest thing to do,” Klieman said. “I want to let the kid breathe a little bit and encourage him to cut it loose, but it’s not the easiest situation to come into as well, when you missed all of spring ball and have to replace a guy that is on a NFL roster and that was beloved here. I mean, the guy was a dude, and Sky is one of my favorite guys, and he’s proven that at that next level. I want to give Adrian that belief, for starters, because I’ve seen it, Collin Klein has seen it and the team has seen it. I don’t want to put so much added pressure on him. I think he’s already had that at his previous place.”

Klieman continued, “It’s just not having that fear of failure. Sometimes, you’re not going to be perfect. There’s not one of us in anything we do professionally or for an athlete that you’re going to be perfect. He’s going to make some mistakes and that’s OK. We’ve got to let him be him and not anything other than himself. When he’s himself, what we’ve seen, he can be a really special talent.

K-State seniors Malik Knowles, Kade Warner and Phillip Brooks have carried the load at wide receiver so far this season. Knowles has 10 catches for 92 yards, Warner has eight catches for 60 yards and one touchdown, and Brooks has four catches for 63 yards. No other wide receiver has made more than one reception in three games.

Klieman explained there’s a logical reason for that trend: Under Klein, K-State has adopted a new philosophy.

“That was one of the philosophical changes that Coach Klein made that I agreed with when he asked about it and made it, and you could go all the way back to bowl prep,” Klieman said. “What had been in the past, CK asked me and said, ‘Here’s what I’d like to do, and I’d like to make it an earned thing where I’m going to play the best guys unless they can’t (play),’ and I agreed with his thought on that. I wanted him to take the reins and we did a great job of that in the bowl game. There’s enough guys getting those reps but the top three are going to be the top three because they’ve proven week in and week out of practice that they’re the best ones.

Redshirt freshman D.J. Giddens proved himself to be a solid No. 2 running back over the non-conference slate. The 6-foot-1, 212-pound Junction City native has 17 carries for 132 yards and two touchdowns. That included his nine-carry, 46-yard effort (5.1 yards per attempt) against Tulane due in part to Vaughn suffering leg cramps in the third quarter.

“We have to have the ball a little bit more and we have to do something with the ball,” Klieman added. “We have to get into some rhythm so we can get some guys in and out. He had a lot of those reps when Deuce was out, but that’s the thing that was difficult for us in general offensively, we didn’t have great rhythm, so it was hard for us to get sustained drives. That’s something that when we do do that, I’m hoping DJ becomes more a part of the offense.”

Desmond Purnell moves up to primary backup to Khalid Duke

Klieman said that strongside linebacker Shawn Robinson is no longer a part of the football team while emphasizing that the senior transfer left for personal reasons, adding, “I have a tremendous amount of respect for Shawn. He stepped away and I supported him stepping away.”

Robinson’s absence has given redshirt freshman Desmond Purnell of Topeka an opportunity to step up as the No. 1 backup to starting junior Khalid Duke.

“(Robinson) hasn’t been with us for a while, so Desmond has been taking all those reps for the last three-plus weeks, and Des has done a really nice job and has been a great spell for Khalid,” Klieman said. “Des is one of our best special teams guys. He cares so much. He’s a Kansas kid and wants to do great and he’s just a redshirt freshman with a bright, bright future, but I’m excited about Des’s progression.”

It hasn’t been difficult to spot senior transfer Josh Hayes this season. He’s usually around the football.

The 6-foot, 189-pounder and one-time defensive back under Klieman and Joe Klanderman during the 2017 and 2018 seasons at North Dakota State has collected eight tackles, including two tackles for a loss and one pass breakup. However, Hayes is making an impact even if it isn’t always reflected on the stat sheet.

“Josh Hayes is one of the best man-coverage guys in the slot I’ve ever been around,” Klieman said. “That helps us. That’s where we had Reggie Stubblefield last year. It helps us because Josh can do those things at the position that Reggie did.”