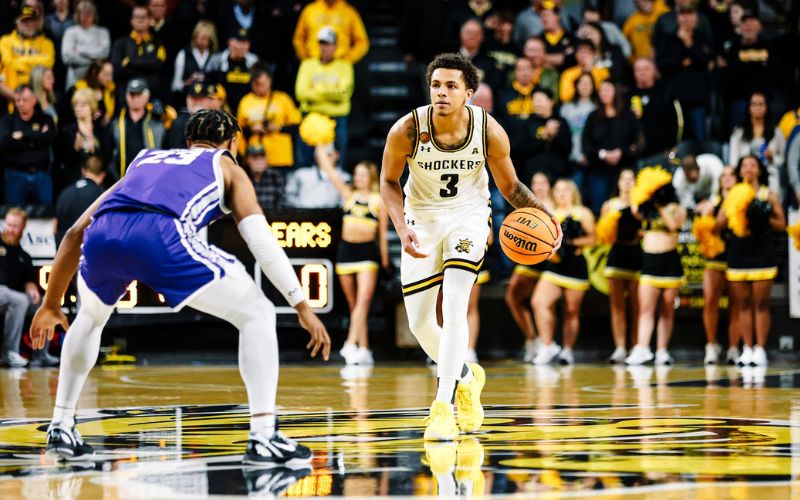 WICHITA, Kan. (GoShockers.com)- Craig Porter Jr. scored 16 of his career-high 22 points in the first half, and new-look Wichita State opened its new season with a 79-55 win over Central Arkansas on Monday night at Charles Koch Arena.

10 of the 12 players that checked in for WSU (1-0) did so for the first time in a Shocker uniform, setting a school record for most debuts. The old mark of nine was established during the 1979 and 2018 openers.

Porter – one of just two holdovers from last year’s active roster – looked like an entirely different player, as well, hunting shots and more-often-than-not sinking them. He went 9-of-11 from the field and added four assists and three steals.

Monday marked the first time in 45 career games at WSU that Porter has finished alone atop the team scoring chart.

The Shockers scored the game’s first 11 points and mounted another 20-2 run just before halftime to take a 41-21 advantage into the locker room. They led by as many as 28 down the stretch.

Quincy Ballard supplied 10 of WSU’s 38 bench points on 4-of-5 shooting and blocked a pair of shots.

Camren Hunter and Johannes Kirisipuu scored 13-each for Central Arkansas (0-1), which made just 4-of-30 threes and finished the night at 30.1 percent from the field.

WSU’s 10 newcomers (eight transfer and two redshirts) also set a school record for most collective points in an opener with 54. A group of nine debutants that included Antoine Carr, Cliff Levingston and Randy Smithson combined to set the old mark of 50 points in the 1979 opener. Markis McDuffie, Landry Shamet and Antoine Grady headlined a group that tied that mark in 2015.

UCA ranked 12th nationally in tempo in 2021-22 and had designs on pushing the pace again on Monday night. The Shockers instead committed just 10 turnovers and their 13.3 turnover percentage was their fifth lowest in 51 games under Isaac Brown.

Porter has blocked at least one shot in each of his last seven games.

Porter had 16 points at halftime and sank a three just over a minute into the second half to best his previous career scoring high (18 vs. Tulane on Jan. 12, 2022).

The Shockers are 1-0 for the 28th time in 30 seasons. They’ve won all three season openers under Brown.

The Shockers took a 2-0 lead in the all-time series with Central Arkansas. They also defeated the Bears in December, 2019.

Wichita State welcomes Alcorn State to the Roundhouse on Saturday (3 p.m. CT, ESPN+). Tickets are available at goshockers.com/Tickets, by phone at 316-978-FANS or in person at the Shocker Ticket Office, open weekdays from 8 a.m. to 5 p.m. in the southwest corner of Charles Koch Arena.