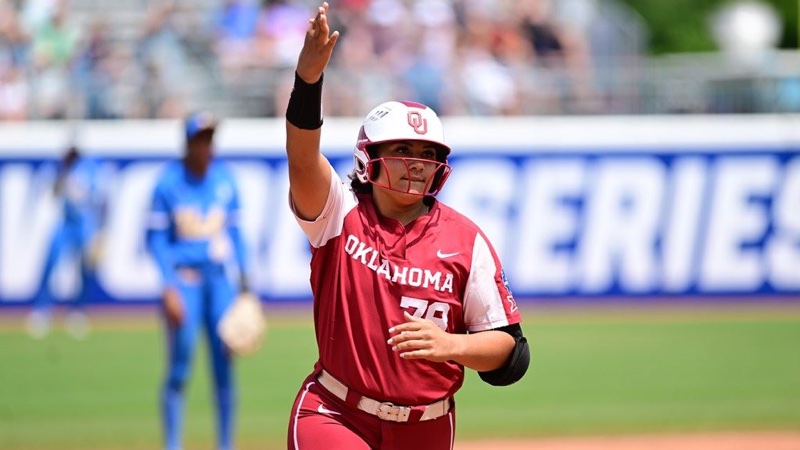 Alo was chosen by a vote of administrators from over 1,000 NCAA member schools and was named the winner over fellow finalists Georgina Corrick (South Florida), Danielle Gibson (Arkansas) and Baylee Klingler (Washington).

Alo rewrote the record books as a Sooner, closing her collegiate career as a two-time national champion, two-time USA Softball Collegiate Player of the Year and the NCAA career record holder for home runs. The Hauula, Hawaii, product was also a four-time NFCA All-American after garnering her third nod to the First Team in 2022.

The two-time Big 12 Player of the Year broke the NCAA career record for home runs, finishing with an unprecedented 122 and led the Sooners to the program’s sixth national title and second consecutive in 2022. She finishes first in NCAA Division I history for home runs, total bases (743) and slugging pct. (.926) and became the first player in history to hit 30 home runs and bat .500 in the same season. She was also the first player to record three seasons of 30-plus home runs, accomplishing the feat in 2018, 2021 and 2022.

Alo joins 2013 alum Keilani Ricketts as the only Sooners to win the prestigious award. Ricketts won the softball award in 2012 and 2013 and also claimed the 2013 Honda Cup.

The Honda Sport Award has been presented annually by the CWSA for the past 46 years to the top women athletes in 12 NCAA-sanctioned sports and signifies “the best of the best in collegiate athletics”.  The winner of the sport award becomes a finalist for the Collegiate Woman Athlete of the Year and the prestigious 2022 Honda Cup, which will be presented on a live telecast on CBS Sports Network on June 27th at 8 p.m. CT.

Five Storylines to Watch at State Softball and State Baseball