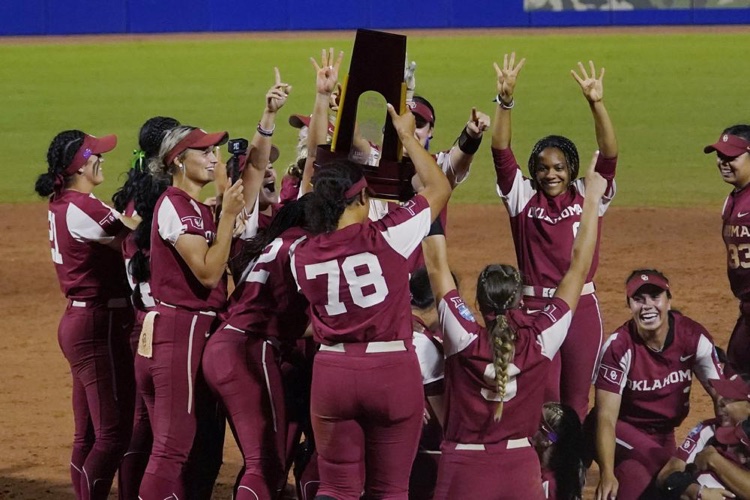 OKLAHOMA CITY (AP) — Jocelyn Alo and Tiare Jennings put Oklahoma on the brink of a repeat national championship with their stellar play throughout the Women’s College World Series.

Their teammates brought it home.

Alo, the two-time USA Softball Collegiate Player of the Year, was named Most Outstanding Player. She hit .667 for the World Series, tied Jennings for a series-record five home runs and set a series mark with 12 runs scored.

Alo ends her career with a Division I record 122 home runs. Most important to her, she ended one of the greatest college careers with a win.

“These are the moments that I’ll remember forever,” she said. “I’m just happy to be going out top and to just know that all the hard work we put in paid off.”

The Sooners (59-3) claimed the best-of-three series against their Big 12 rival 2-0 after winning Game 1 on Wednesday 16-1 with a record six home runs. It was Oklahoma’s sixth overall national championship and fifth in the past nine World Series.

Alo hit a hard single in her final at-bat in the sixth inning and later scored. In the seventh, she stepped in to play left field and caught two fly balls for outs before leaving the game to a standing ovation.

The future looks bright for the Sooners. Jennings — just a sophomore — set a World Series record with 15 RBIs. Coleman is a sophomore, too.

And then there’s Oklahoma’s Jordy Bahl (22-1). The NFCA Freshman of the Year settled down after a rough start. She allowed two runs and four hits in four innings.

“We’re all competitors, and when you are a competitor, if there’s something else out there you can go get, you’re going to want to go get it,” Bahl said. “So I don’t ever worry about us ever losing our hunger to win more national championships. I’m going to enjoy this one.”

Texas wasn’t even expected to reach the World Series, but the Longhorns expected a better performance than they gave in Game 1. Texas coach Mike White called Wednesday’s loss to Oklahoma embarrassing and thought Thursday’s effort was better.

“My job was to pick them back up, (have them) come back out and fight,” White said. “Do the Texas fight. I thought we did that. I thought we fought well. Just didn’t turn out our way.”

Texas pitcher Estelle Czech (13-2) began Thursday’s game with three shutout innings, but ran into trouble in the fourth and fifth and was replaced.

Mia Scott hit a three-run homer and JJ Smith had two hits for the Longhorns (47-22-1), who had survived six elimination games in NCAA tournament play before Thursday.

“I think it was all worth it in the end to say that we left it all out there and emptied our gas tanks to get to where we are,” Texas catcher Mary Iakopo said.

The Longhorns looked ready to compete on Thursday. They loaded the bases with no outs in the first and scored two runs, but Coleman jumped above the fence for a spectacular grab that robbed Courtney Day of a two-run homer and ended the inning.

“I have seen Jayda do that over and over and over in practice, but when it’s in a game and she has your back as well as everyone else on our defense, that stuff fires me up more than any strikeout ever will,” Bahl said. “It gives us momentum and really just lets me take a deep breath because they got me.”

Oklahoma finally got on the board in the fourth. After the Sooners got their first run following a throwing error, Taylon Snow’s RBI single tied the game at 2-all.

In the fourth, Coleman had another defensive gem, throwing out a Texas runner at second from the warning track.

Alyssa Brito’s RBI double in the fifth gave Oklahoma the lead for the first time, and Hansen’s blast later in the inning put the Sooners up 6-2.

The crowd stood for Alo’s at-bat in the sixth, hoping for one more blast. Instead, her single loaded the bases. Two batters later, Lyons’ homer made it 10-2.

Then Alo had her moment in the seventh. Tears streamed down her face as she ran off the field.

“Going back-to-back — no better way to finish your career,” Alo said. “I’ve had a lovely five years here, and it’s been hard at times, but I wouldn’t change it … I’ve enjoyed my journey here, and sad that it’s coming to an end.”