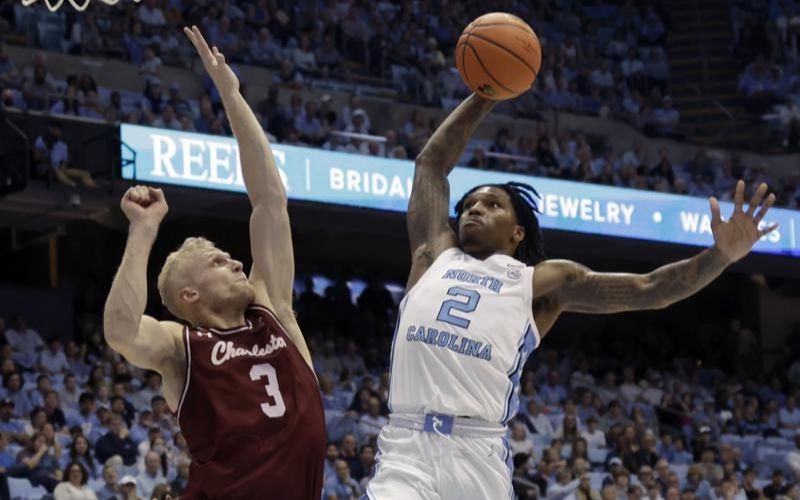 (AP) – North Carolina didn’t have a dominating start at No. 1. The Tar Heels open their second week atop the Associated Press men’s college basketball poll with coach Hubert Davis reminding his players it will take time to find a flow like the one that carried them to last year’s NCAA championship game.

UNC (2-0) earned 44 of 63 first-place votes to finish ahead of No. 2 Gonzaga in Monday’s first regular-season AP Top 25, which featured only slight changes from the preseason poll released Oct. 17.

The Tar Heels return four starters from last year’s team, including AP preseason All-American Armando Bacot inside. But they labored through wins last week, first against UNC Wilmington and then against College of Charleston.

After the opener, Davis said he hoped it was “first-game anxiousness and nervousness.” After the second, he said he had talked to his team about dealing with expectations.

“One of the things I’ve sensed in them — I just felt not a nervousness, but maybe a little bit of a burden of the expectations,” Davis said. “And I tried to get them to understand that though those are expectations are noise, it means nothing.

“I felt like on every play, they were trying to make it look like the way we looked in April. That’s just not possible. That just can’t happen. This is this year’s team.”

The second-ranked Bulldogs (2-0) picked up 14 first-place votes after wins against North Florida and Michigan State, the latter coming on the deck of an aircraft carrier. Third-ranked Houston (2-0) and fourth-ranked Kentucky (2-0) picked up the remaining five votes.

Baylor and Kansas were tied for fifth previously. This time, Baylor is alone at No. 5, followed by Kansas and Duke. UCLA, Arkansas and Creighton round out the top 10.

Duke and Villanova both are starting with young coaches replacing retired Hall of Famers. One had an early stumble that carried it right out of the poll.

The Blue Devils beat Jacksonville and USC Upstate — surrendering 82 combined points — in their first two games under Jon Scheyer, who has taken over for Mike Krzyzewski in that program’s first coaching change since 1980.

The Wildcats have turned to Kyle Neptune, who took over in the spring after the retirement of Jay Wright. They won their opener against La Salle then lost to Temple, which dropped them from 16th to unranked for the first time since February 2019.

Illinois (2-0) had the biggest jump, climbing four spots to No. 19 after two easy home wins. No. 14 Arizona and No. 21 Dayton each rose three spots. In all, 12 teams moved up from the preseason poll.

Tennessee (1-1) took the biggest tumble, falling 11 spots to No. 22 after losing to Colorado in its home state.

Kansas — which fell out of the voting tie at No. 5 — Creighton and No. 15 TCU fell one spot each to round out the four teams that slid from their preseason rankings.

Seven teams, all inside the top 10, held their preseason position.

No. 24 Texas A&M and No. 25 Connecticut are the week’s new additions. The Huskies spent most of last season in the AP Top 25, though the Aggies joined the poll for the first time under fourth-year coach Buzz Williams. Texas A&M was last ranked in February 2018, a season that ended with an NCAA Sweet 16 appearance.

Oregon (No. 21) joined Villanova as the two teams to fall out from the preseason poll. The Ducks opened with a home win against Florida A&M but lost at home to UC Irvine four days later.

The Southeastern Conference led the way with six ranked teams, with No. 13 Auburn and No. 18 Alabama joining Kentucky, Arkansas, Tennessee and Texas A&M.

The Atlantic Coast Conference had three, with No. 16 Virginia joining UNC and Duke; while the Big Ten had three with No. 12 Indiana and No. 20 Michigan joining Illinois.

The Pac-12 and Big East each had two ranked teams, followed by the West Coast, American Athletic, Mountain West and Atlantic 10 conferences each having one.