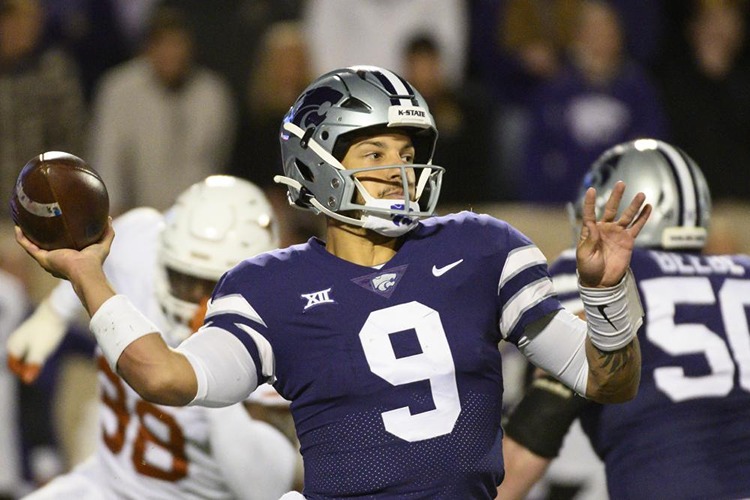 The winner will be in much better position to earn a spot in the Big 12 championship game. The Wildcats and defending conference champion Bears are tied with No. 18 Texas for second place behind undefeated and fourth-ranked TCU. Kansas State is trying to bounce back from a home loss to the Longhorns that cost the Wildcats control of their path to the title game. Baylor has won three consecutive games since a loss at last-place West Virginia, including 38-35 last week at Oklahoma to finish a stretch of three out of four games on the road.

Baylor QB Blake Shapen vs. Kansas State pass defense. Shapen saw his first significant playing time as a freshman last season at K-State. Replacing injured starter Gerry Bohanon, he completed 16 of 21 passes for 137 yards and ran for 44 in a 20-10 victory. Shapen won the job in spring practice, and Bohanon transferred to South Florida. Shapen has 13 TD passes and six interceptions this season, and is facing a defense that is second in the conference and 15th nationally with 11 interceptions.

Kansas State: QB Adrian Martinez is closing in on joining Colin Kaepernick (Nevada, 2007-10) as the only FBS players with at least 10,000 yards passing and 3,000 rushing. The Nebraska transfer has 9,727 yards passing, including 326 against the Longhorns in his return from injury. He has 2,918 yards rushing.

Baylor: RB Craig “Sqwirl” Williams rushed 25 times for 192 yards and two TDs against the Sooners. He also had the heads-up play of the game by taking a knee on a 43-yard run instead of scoring, which allowed the Bears to run out the clock.

Baylor freshman RB Richard Reese was limited to four carries against Oklahoma as the Bears had a number of players affected by the flu. Reese is first nationally among freshmen with 13 rushing TDs. … All three of Kansas State’s losses have been to teams that are currently ranked. They are TCU, Texas and No. 16 Tulane. … Baylor is playing a team with an identical record for the second time in three weeks. The other was a 45-17 win at Texas Tech. … Wildcats RB Deuce Vaughn needs 25 yards rushing for his second consecutive 1,000-yard season. He would be the third Kansas State running back with multiple seasons of at least 1,000 yards. … Baylor had five interceptions against Texas Tech and three against Oklahoma. Those eight picks are the most in a two-game span for the Bears since 1980.