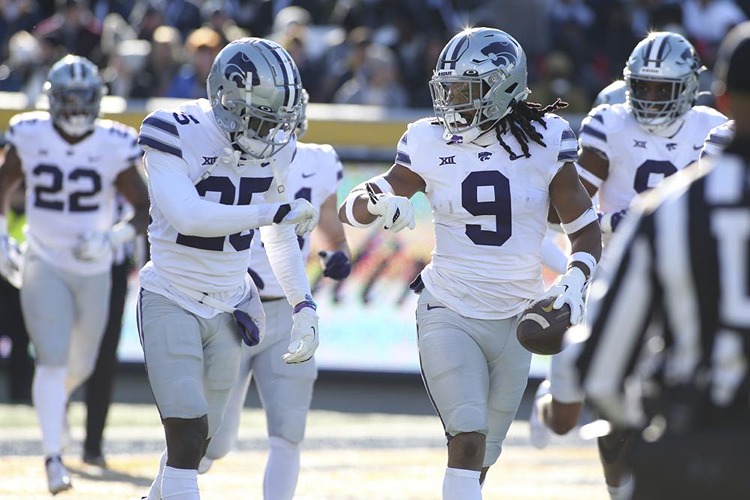 MORGANTOWN, W.Va. (AP) — One of No. 19 Kansas State’s longest road trips of the Big 12 season might as well have been a home game for quarterback Will Howard.

Howard threw two touchdown passes and ran for another score, Cincere Mason returned an interception for a TD and the Wildcats moved closer to a berth in the Big 12 championship game by beating West Virginia 48-31 on Saturday.

Playing at West Virginia was as close as Howard will get to his hometown of Downingtown, about 280 miles (451 kilometers) from Morgantown in eastern Pennsylvania. Howard said about 30 relatives and friends cheered him on.

Kansas State (8-3, 6-2 Big 12, No. 15 CFP) can clinch a title game spot alongside No. 4 TCU on Dec. 3 with a win in its regular season finale at home Saturday against Kansas, or with a loss by Texas to Baylor on Friday.

Howard said coach Chris Klieman told the team in the locker room to take some time to soak in the win over the Mountaineers first.

“We’re going to enjoy this one today and have fun on the plane ride home,” Howard said. “We know it’s our process mindset every week: One day at a time. We know we’ve got a big one next week. But we’re going to start worrying about that one tomorrow.”

West Virginia (4-7, 2-6) failed to become bowl eligible for the second time under fourth-year coach Neal Brown and for only the fourth time since 2000.

Both team’s quarterbacks played well in a battle among backups.

Howard, starting in place of the injured Adrian Martinez, completed 19 of 27 passes for 294 yards.

“Will’s a seasoned veteran now,” Klieman said. “I couldn’t be more happier for the guy because he’s worked his tail off.”

West Virginia’s Garrett Greene, who got the nod ahead of JT Daniels, threw three TD passes to Sam James and finished 15 of 27 passes for 204 yards. He was intercepted twice. Greene also scored on a 13-yard run.

“Garrett did some good things,” Brown said. “He ran around and made some good decisions, made some bad decisions. That’s going to happen when you’re in your first career start.”

Kansas State led 28-19 after the first quarter. Mason’s 37-yard interception return put the Wildcats up 14-0 a little more than 3 minutes into the game. Later in the quarter, West Virginia’s Malachi Ruffin returned an interception 43 yards for a score. But West Virginia couldn’t mount a comeback.

By halftime, Kansas State had 312 total yards and led 41-25. It was the highest scoring first half by the Wildcats since scoring 45 against Montana State in 2008, and the most allowed by West Virginia since allowing 56 to Baylor in 2013.

Kansas State could move up a spot or two in the AP Top 25 poll.

Kansas State: The Wildcats have won three of their last four. Behind Howard, Kansas State tied its biggest output of the season against the league’s worst scoring defense and improved to 4-1 on the road.

West Virginia: There were about 23,000 empty seats in the stadium, and it will be up to the school to decide whether it was the final home game for Brown, who has a 21-25 record with four years remaining on his contract. Athletic director Shane Lyons was fired last Monday, and WVU President Gordon Gee said no other changes will be considered until after a new athletic director is hired in the next few weeks.

Kansas State hosts Kansas next Saturday. The Wildcats have won 13 straight in the Sunflower Showdown.

West Virginia plays at No. 24 Oklahoma State next Saturday.