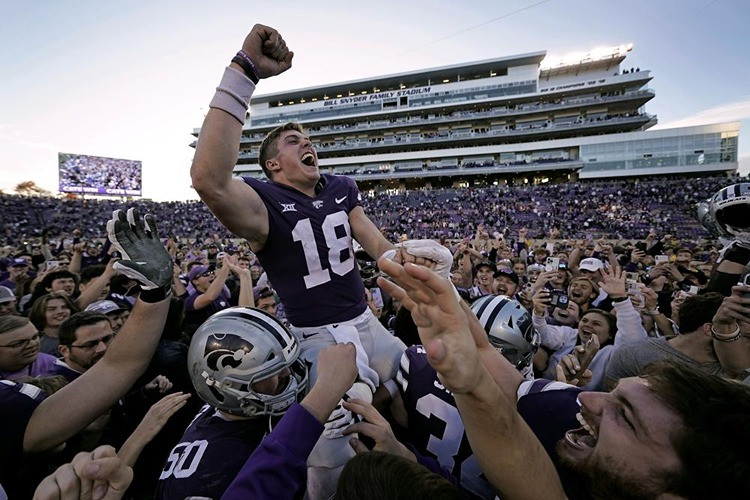 Kansas State quarterback Will Howard (18) celebrates with the crowd as he is carried off the field by teammates after an NCAA college football game against Oklahoma State Saturday, Oct. 29, 2022, in Manhattan, Kan. Kansas State won 48-0. (AP Photo/Charlie Riedel)

But then he wouldn’t have found himself in the unlikeliest of spots last Saturday night, getting carried off the field by delirious teammates and fans after a 48-0 rout of then-No. 9 Oklahoma State.

Howard threw for 296 yards and four touchdowns without an interception, sending the No. 13 Wildcats (6-2, 3-2) soaring up the AP poll and keeping them a game back of TCU in the Big 12 title race.

“Football is a game, it’s truly all up here,” Howard said, pointing at his head, “especially at the quarterback position. I’ve learned a lot of things — what to do, what not to do. And all the other games I played in 2020 and 2021, all those struggles and hardships I had, helped this to happen and helped the success we’re having right now.”

It’s created a predicament at Kansas State, though. Martinez was only ruled out against Oklahoma State about 30 minutes before kickoff, and there’s a chance he could be recovered enough from a knee injury to play against Texas on Saturday.

Do the Wildcats go back to their starter or keep riding Howard’s hot hand against the Longhorns?

“We’ll find out how the week goes,” Kansas State coach Chris Klieman said Tuesday. “I don’t have the answer.”

The Longhorns (5-3, 3-2), meanwhile, are coming off their bye with some quarterback issues of their own.

Quinn Ewers was just 19 of 49 for 319 yards with two touchdowns and three interceptions against the Cowboys two weeks ago, badly overthrowing wide receivers while Texas was blowing the lead in a 41-34 loss. Longhorns coach Steve Sarkisian said he never considered pulling Ewers for Hudson Card, but another poor performance could change his mind.

“Sometimes you have to learn it the hard way, playing quarterback: When we win, you probably get too much credit, and when we lose, you probably get too much blame, and you have to be careful to ride that emotional rollercoaster,” Sarkisian said. “Keep the noise quiet and know that myself, the coaching staff, the team is in the foxhole with him, and we’ll go to battle with him every day, and I think that’s the approach he’s had and will continue to have.”

TO REDSHIRT OR NOT

One factor in whether Howard or Martinez will play going forward is the redshirt status of Howard, who has now played in two of the four games he would be allowed while maintaining his year of eligibility.

“That’s definitely a consideration,” Howard said. “It’s something we still need to talk about, something we’re still deciding on, but you know, obviously the mission is the mission: focus on winning and going as far as we can this year.”

Kansas State debuted at No. 13 in the initial College Football Playoff rankings, the first time the Wildcats have been in the poll since Week 11 of the 2019 season. Texas came in at 24th.

Texas running back Bijan Robinson leads the Big 12 with 920 yards rushing, and Kansas State counterpart Deuce Vaughn is second with 902. And wouldn’t you know it? The two have become good friends away from the field.

“I actually talked to him this past weekend. He wished me luck against Oklahoma State, we texted after the game,” Vaughn said. “This is already Year 3 that we’re playing. It’s going to be fun to compete against each other one more time.”

The Wildcats are averaging 228 yards rushing per game, putting them just outside of the top 10 nationally. But they’ll be facing one of the best run defenses in the nation in Texas, which is holding opponents to 3.32 yards per carry.

Sarkisian was recruited to Kansas State by Hall of Fame coach Bill Snyder out of El Camino College, but he ultimately went to BYU. Coincidentally, the Cougars played the Wildcats in the Cotton Bowl in his final game as their quarterback.

“I went back there as a coach with USC. I’ve been there a couple of times,” Sarkisian said. “Great environment.”