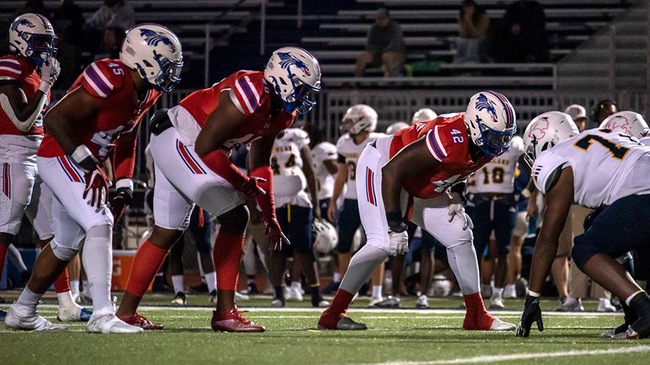 HUTCHINSON, Kan. – One week ago, circumstances came together to help the No. 1-ranked Hutchinson Blue Dragons clinch the 2022 Jayhawk Conference championship.

Hutchinson defeated Highland 31-7, and with Coffeyville’s 19-14 win over Butler, the Blue Dragons earned some new hardware as the conference champion.

The Blue Dragons play their final conference game of the season on Saturday against the Independence Pirates. Kickoff is set for 1 p.m. at Gowans Stadium.

Just because the KJCCC title has been wrapped up, that doesn’t mean there isn’t plenty on the line for the Blue Dragons. The No. 1-ranked Blue Dragons need a victory today to remain in firm contention for the NJCAA Football Playoffs. The Dragons play Independence Saturday and will be at No. 2 Iowa Western next week in Council Bluffs, IA.

The Pirates come into Saturday’s game coming off a bye week and with the knowledge of how to defeat the Blue Dragons in Gowans Stadium.

One season ago, the Pirates stunned the Blue Dragons as Indy rallied from 14 points down and won 33-28 when Deontay Wilson broke a couple of tackles and wound his way for a 53-yard touchdown with 6 seconds left in the game.

The Blue Dragons exacted revenge in a big way when Dylan Liable tied a career high with 365 passing yards and five touchdown passes – Malik Benson caught five passes for 197 yards – as Hutchinson rolled to a 42-0 win in the Jayhawk Conference Playoff semifinals in Independence.

The Dragons are riding a 14-game winning streak, which is tied for the second-longest streak in program history, matching a run from 1968 to 1970.

Last week against Highland, the Blue Dragons held their fifth opponent to 10 points or less and forced four takeaways against the Scotties. The Blue Dragons had a season-low 340 total yards, despite a 110-yard rushing performance from Tim Byrd Jr.

The Blue Dragons are 4-0 this season at Gowans Stadium with wins over No. 13 Navarro, No. 7 Iowa Central, No. 9 Butler and Highland. The Dragons go in search of their 17th undefeated season on home turf.