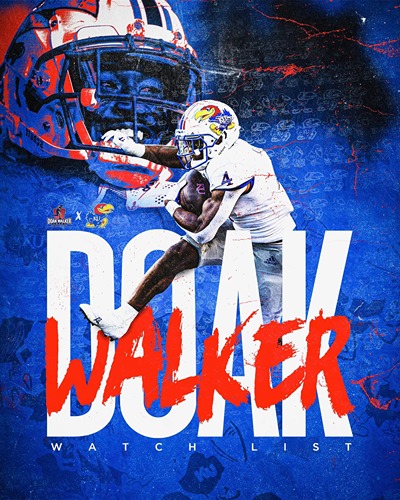 Neal, a rising sophomore, burst onto the scene last year as a true freshman with 707 rushing yards and eight touchdowns on 158 carries, averaging 4.2 yards per carry in his debut season. The Doak Walker Award recognizes the top running back in the country and is the only major collegiate award that requires all candidates to be in good academic standing and on schedule to graduate.

Neal, entering his second season with the Jayhawks, has thrived on and off the field since donning the crimson and blue. One of the team’s most active community service attendees, Neal had some of his biggest games last year against some of the best competition.

Against Oklahoma, Neal ran for 100 yards and two touchdowns, before going off for a career best 143 yards and three touchdowns at Texas in a 57-56 overtime win.

He was named Co-Big 12 Newcomer of the Week following the Oklahoma game and was then named Big 12 Offensive Player of the Week after the Texas win. He was also named Honorable Mention All-Big 12 after the season.

A Lawrence native, Neal also proved he was capable catching passes, with seven catches for 57 yards and a touchdown, which came against the Longhorns.

Neal is the first Jayhawk to be named a preseason candidate for the Doak Walker Award since James Sims in 2013.

Neal and the Jayhawks will open the season Sept. 2 at home against Tennessee Tech.