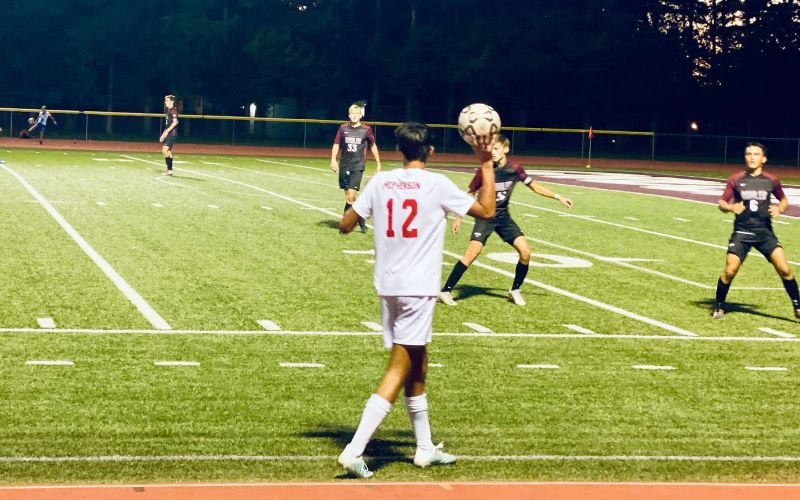 BUHLER, Kan. – Injuries continue to put the Bullpup Boys Soccer team behind the 8-ball this season, Tuesday, they traveled to take on the Buhler Crusaders for a league match, and highly anticipated rivalry.

The contest would be tied 1-1, going into the halftime break, as Hayden Hoxie would get the Pups on the board, scoring on a free kick. “It was really who was going to get that second goal first.” said Head Coach Chris Adrian, “Unfortunately they got it on a penalty kick.” The Pups had their opportunities with 6 shots on goal, but the Buhler defense stood their ground, and the Crusaders were able to add an insurance goal late, to win 3-1. Coach Adrian said, “There was about a 5-minute stretch where I thought we had them on their heels, we were creating, and we were getting chances, but I can’t fault the boys’ effort.”

Trenton Moll would be in goal in the second half, and was credited for his ability to come in and play a difficult position. Adrian also noted Tito Mendez for making some great plays defensively, along with Gavin Henry having a really strong game.

“You saw improvement with how we played, and passed the ball, but still, we tend to beat ourselves too many times with turnovers, that’s something we’ve still got to work on.” Adrian said, “We’ve got guys on this team that can score, we’re just not getting them into positions to do so, so that’s the area I’ve got to make sure we’re working on, and getting better there.

“It doesn’t get any easier,” said Adrian, who’s team now focuses on their next road test on Thursday, when they travel to Rose Hill. “They’re going to be a really good team.” said Adrian, who’s hoping for the best regarding the injury situation. he concluded by saying, “In order to be successful, it’s going to take everyone working together.

Fourth-Quarter Rally Propels No. 1 Dragons Past No. 4 Reivers