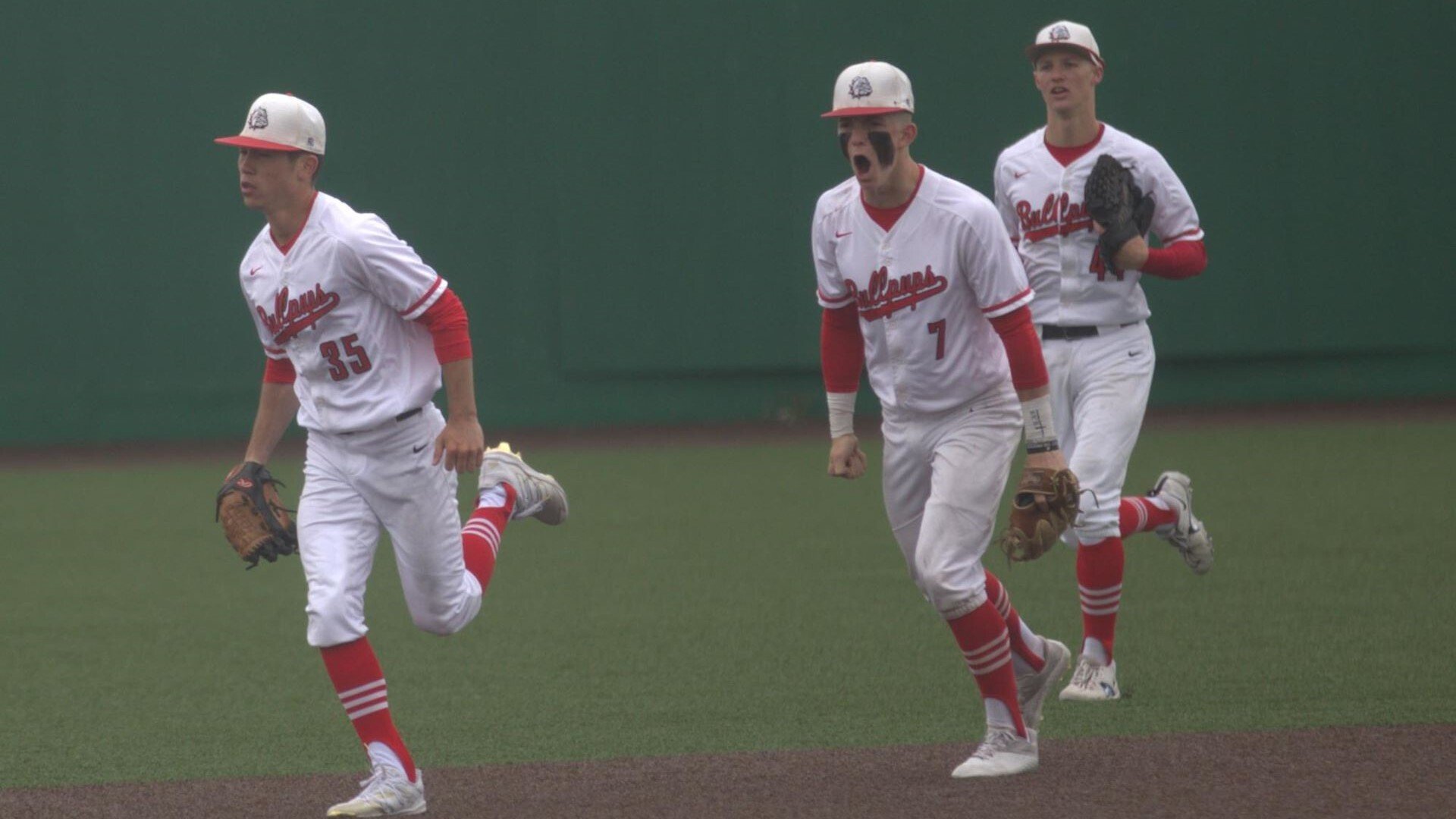 SALINA – Acknowledging the gamble, McPherson coach Heath Gerstner put forth a plan that would conserve his top pitchers for Day 2 of the Class 4A state tournament.

The Bullpups then executed that plan to perfection and reaped the rewards, capturing their first state baseball title with a 5-2 win over Tonganoxie in the championship game on Friday at Dean Evans Stadium.

McPherson treated its state opener El Dorado as a bullpen game, using six different pitchers, none of which threw more than 30 pitches. After earning a 7-3 win on Thursday, the Bullpups were set up well for the second day, with Hunter Alvord and Jaret Myers combining to allow just three runs in the semifinal and final.

“Day 1 was a gamble for us, and we knew that going in,” Gerstner said. “We told our team up front, our goal was to go win this thing, not go play to win Day 1. We felt like this was a plan we put on paper and put together to give us a chance to win the whole thing, and props to our guys for executing that plan, because it paid off and worked just like we thought.”

Alvord went the distance in a 6-1 win over Ottawa in the semifinal, allowing just one run on four hits. He also helped his cause by hitting a two-run homer.

Myers, who was limited to 25 pitchers in the Thursday’s opener, went 6 1/3 innings in the final, allowing two runs on seven hits with one walk and six strikeouts before Alvord came on to get the save.

“They were both just great,” Gerstner said of Myers and Alvord. “Really attacked hitters with multiple pitches for strikes, and our defense was just fantastic behind them.”

McPherson’s Hunter Alvrod rounds the bases after hitting a home run against El Dorado on Thursday.

McPherson (23-2) took advantage of a Tonganoxie error to score two runs in the bottom of the first. Dawson Feil delivered a run-scoring double in the third, and Tucker Pelnar followed with a single before a Chieftains’ error brought in another run.Pelnar later notched an RBI single in the fifth to extend the lead to 5-0.

Tonganoxie got on the board with Sam Kleidosty’s RBI triple in the seventh, and Gehrig Goldbeck singled in Kleidosty to bring the Chieftains within three runs. Alvrod got the last two outs by strikeout and flyout to end it.

Gerstner said great defense has been a staple for the Bullpups.

“We don’t really have anybody on the mound that’s going to overpower guys or go strike out 10 or 12 guys in a night, but our defense has just been nails,” he said. “Our outfielders can really, really run and track a ball. They’ll go back or forward and play aggressively.

“And our infielders, we have seniors and guys that have played a lot of baseball. We’ve been fortunate to put nine guys out there that know how to play the game and make the routine play. And I just believe that if you’re throwing a lot of strikes and not giving anybody any free bases, you got a good chance every single night.”

McPherson’s Aiden Hoover brings a pitch to the plate against El Dorado on Thursday.

The Bullpups regrouped this season from a heartbreaking exit in regionals last year, falling 7-6 to Mulvane.

“I thought we had a really special team last year and was unfortunate to lose in regionals,” Gerstner said. “Didn’t play our best baseball that night on regionals. That’s kind of the way it works in Kansas, you’ve got to bring it in postseason.

“We only have three seniors, and early on, they were ready to go win a state title and talking about those types of things. I put it right back on them that we’re not going to cut corners, we’re going to do extra. We just can’t expect it to be handed to us. They’ve been fantastic. Those three guys – Aiden Hoover, Jaron Brown and Tytin Goebel have just been great leaders for us and great players for us all spring. … It’s pretty cool to see them set a goal and then go get it.”

It was the Bullpups’ eighth trip to the state tournament with their previous highest finish a runner-up showing.

“A lot like I’ve dreamt it,” Gerstner said of winning state. “Something I really worked for and believed in, and I thought we could get this done eventually.

“Just overwhelmed today. Fantastic day, fantastic moment, and so excited for our kids.”

Tonganoxie finished the season 20-4. They beat Abilene 10-5 on Thursday and took a 7-5 win over Paola in the semifinal. Goldbeck and Rocco Gehring each had two hits for the Chieftains in the title game.

Paola claimed third place with a 6-0 win over Ottawa.