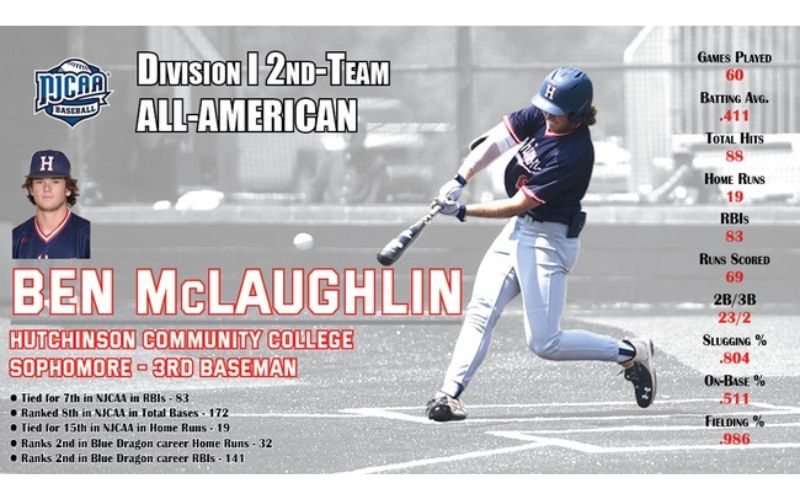 The All-America honor caps a long list of postseason accomplishments for the sophomore from Golden, Colorado, who will continue his playing career with the College World Series-bound Arkansas Razorbacks next season.

Also this season, McLaughlin became the first Blue Dragon to be named Region VI Defensive Player of the Year. He was a first-team All-Jayhawk Conference Western Division and first-team All-Region VI selection as well.

The sophomore infielder started the season at first base and then moved to third base on March 24. He committed no errors at third base over the final 32 games of the regular season and had just two errors at the hot corner all season long. McLaughlin fielded .986 this season with only three errors in 222 fielding chances this season.

McLaughlin had a 16-game and 13-game hitting streak this season. He had 29 multi-hit games (17 two-hit games and 12 three-hit games) and 23 multi-RBI games this season.

McLaughlin was named the NJCAA National Player of the Week on May 11, going 11 for 16 with three doubles, three home runs and 11 RBIs in a four-game series against Dodge City.

McLaughlin tied for seventh in the NJCAA in RBIs and was eighth in the nation in total bases with 172. His 19 home runs tied for 15th in the NJCAA. McLaughlin was sixth in the Jayhawk Conference with a .411 batting average and was fifth in slugging percentage at .804.

The sophomore had 29 multi-hit games, including 12 three-hit games. He had 23 multi-RBI games with a season-high five RBIs against Dodge City on May 6. McLaughlin owns the Blue Dragon single-game RBI record with nine against Pratt on April 3, 2021.