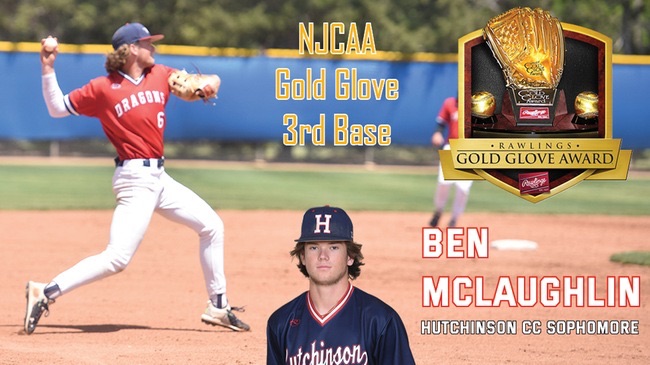 The Gold Glove award capped an impressive list of postseason awards for the sophomore from Golden, Colorado. McLaughlin was also named second-team NJCAA All-American as well as first-team All-Jayhawk West, first-team All-Region VI and the Region VI Defensive Player of the Year.

McLaughlin is the fourth Blue Dragon in program history to earn a national Gold Glove. Others are Shane Cooper (shortstop) in 2017, Michael Helman (2nd base) in 2016 and Bennett Oliver (third base) in 2014.

McLaughlin started the 2022 season at first base and then moved to third base on March 24.

He committed no errors at third base over the final 32 games of the regular season and had just two errors at the hot corner all season long.

McLaughlin fielded .986 this season with only three errors in 222 fielding chances this season.

McLaughlin is the only Jayhawk Conference player to earn a national Gold Glove.

The future Arkansas Razorback also had a huge offensive season for the Blue Dragons in 2022.

Dragon Volleyball Up One Notch in NJCAA Rankings