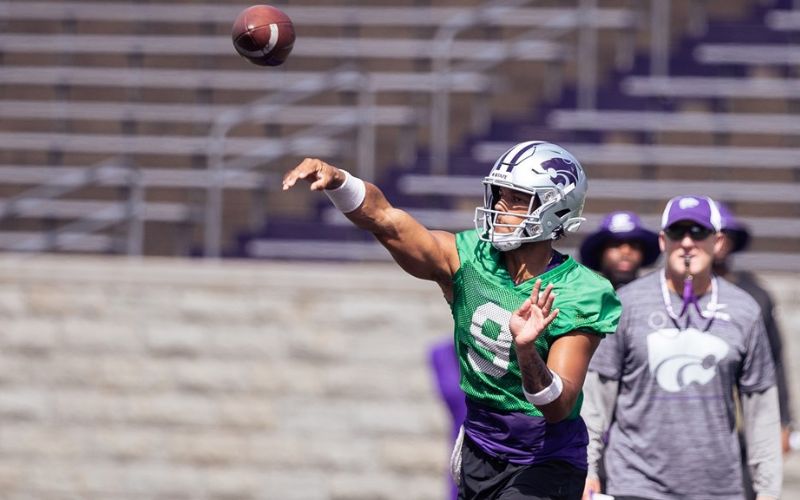 “He has all the talent in the world,” Klieman said, adding, “he’s going to make the plays. I know that.”

The 6-foot-3, 225-pound Martinez has been the talk of the Little Apple since transferring from Nebraska in December. While everyone knows what Preseason All-American Deuce Vaughn can do with the football, a curious mystique has surrounded Martinez, who was recovering from surgery to his throwing shoulder when he arrived on the K-State campus after the 2021 season. Although he has yet to publicly deliver any of the exciting completions that teammates raved about during the offseason, it may be only a matter of time before Martinez shines.

“He’s really good at throwing the football,” Green said. “He’s good at looking us off. A lot of time we’re playing his eyes and he’ll look us off and he knows where he’s going with the ball. You see people in the NFL do that kind of stuff. He’s been around a long time, and he can obviously run, so he’s a double threat.

Martinez is one of just two active quarterbacks in the nation with 8,000 passing yards and 2,000 rushing yards in a career.

The four-year starter for the Husker threw 45 touchdowns and 30 interceptions while starting in 38 of 39 games.

“We’re doing a lot of good things good-on-good and he’s having to go against the first-team defense (in fall camp),” Klieman said. “Has he made mistakes? You bet, and he’s owned the mistakes and he’s learning from the mistakes, and it’s going to take some game reps as well as him getting more comfortable with how Coach Collin Klein calls it.

“Those two are on the same page, but I think it’s going to take some repetition in games.”

The 32-year-old Klein enters his first full season as offensive coordinator. The 2012 Heisman Trophy finalist is eager to unfurl a varied attack that could cause opposing defenses headaches this season.

Klein, during a meeting with reporters after a fall practice said, “He’s been awesome.”

“He has a great foundation and football IQ,” Klein added. “He’s great to work with and we love studying the game. He’s been great.”

Martinez is expected to replace record-setting Skylar Thompson, who was taken by the Miami Dolphins in the seventh round of the 2022 NFL Draft.

“I see (Martinez) playing so fast and so much faster from practice one to practice four to practice eight to practice 14 and 15,” Klieman said. “He’s getting more and more comfortable.”

Already, Martinez has apparently earned the trust of his teammates. They voted him as one of six team captains this past Sunday. Martinez also served as team captain three years at Nebraska. He is the only player in Nebraska history to do so.

Klieman said that Martinez “deserved the honor of being a captain” for the Wildcats.

“Part of it is the position and part of it is the demeanor of Adrian, the personality of Adrian,” Klieman said. “He’s a very engaging person, a very positive guy, and very mature, and just the way he bonds with all sorts of different positions, and not just on the offensive side, but on the defensive side.

“He deserved it. He earned the right from his peers. I’m excited for him because I know he’s finally comfortable at Kansas State and knows he has high expectations and knows that he has a lot of people around him who can help him.”