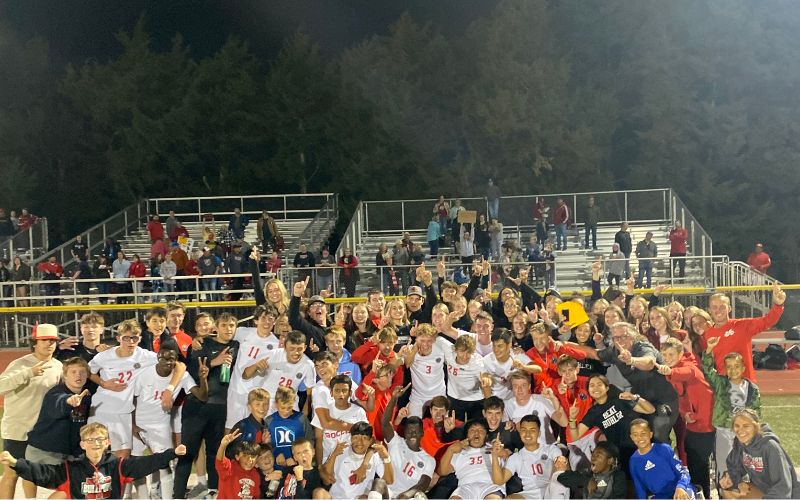 BUHLER, Kan. – The stage was set for another McPherson and Buhler rivalry on Tuesday, as the winner would advance to the 4-1A Boys State Soccer Semifinals in De Soto on Friday. This was the second time the teams met at Crusader Stadium this season, with the first match going to the Crusaders, as they would defeat the Bullpups 3-1.

Buhler came into the state quarterfinals on a 16-game winning streak at 17-1, and although the Pups entered with a record of 7-11, after winning their last four matches, three of which, came in upset fashion, and this was a different McPherson High Soccer team, than what Buhler previously went up against just over a month ago.

There was much anticipation for kickoff, and the Pups would begin the match going against the wind. Both teams exchanged a few opportunities around the net, with a defensive battle taking place all night. Head Coach Chris Adrian said, “We’ve learned we’re not going to win a lot of games when we give up 3 or 4 goals, we’re not built to go out overpower a team offensively, but we’re really strong defensively, we’re really strong on set plays, corner kicks, free kicks, you saw that today.”

The match was scoreless until Hayden Hoxie bounced one into the back of the next from about 20 yards out. Coach Adrian later explained that the ball had about 6-feet of movement when it left Hoxie’s foot.

From that point on it seemed that Buhler would apply the pressure, nearly finding a goal before the half but Josh Wehrman would preserve the 1-0 lead for the Pups, making a great save before the half. “He made three just remarkable saves,” Coach Adrian said following the match, “He was our manager for his freshman and sophomore year. He’s got two years of soccer experience, and for him to come out and do something like that..so proud of him.” Adrian explained that there are many more amazing stories on the entire team.

The Pups would find themselves playing keep away from the Crusaders, who would control the ball a majority of the second half. McPherson would survive back-to-back corner kicks with 15 minutes to play, but the play of the game came with 5 minutes left, as Buhler would send a shot just off the corner of the crossbar and the post, with the effect echoing around Crusader Stadium. Coach Adrian explained that was the point he said to himself, “We’re going to do this.” “You could feel like it’s meant to be today, there’s a little sense of destiny with this team.” He mentioned statements being made about a rebuilding year, but he said, “These guys just come everyday with the mindset and attitude at practice that we’re going to get better today, then tomorrow, we’re going to get better tomorrow.”

Adrian concluded by saying, “Ultimately we got the pieces in the right place is what it felt like about four weeks ago, and something just clicked,” said Adrian, “Once it clicked once, the belief followed, and once these guys believed, there’s nothing stopping them.”

On Friday, the Bullpups will travel to De Soto for the 4-1A State Semifinals to take on Baldwin High School at the De Soto High School Soccer Complex. The match is scheduled for 5 p.m. Wichita-Trinity Academy and Bishop Miege will follow at 7 p.m.