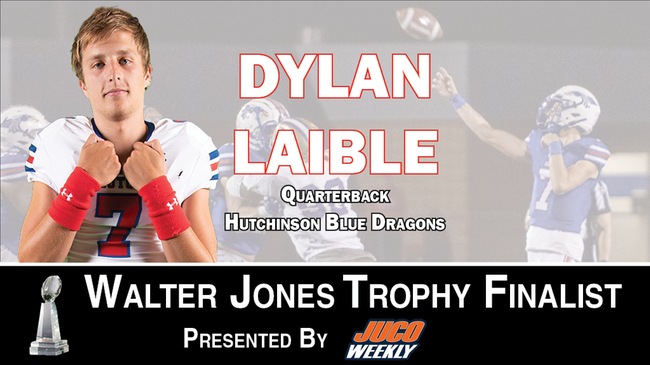 HUTCHINSON, Kan. – Hutchinson Community College sophomore quarterback Dylan Laible has been named a finalist for the inaugural Walter Jones Award, symbolic of the best player in the nation at the junior college level.

Laible and two other finalists – Jones running back Robert Henty and Iowa Western defensive end Jackson Filer – will find out the winner of the first Walter Jones Award at a banquet on Monday, November 21 at the Hilton Orlando at Altamonte Springs in Altamonte Springs, Florida.

The award was created by Juco Weekly and its namesake was one of the top players of all time as an offensive lineman or any position. Walter Jones started his journey to the Pro Football Hall of Fame at Holmes Community College in Mississippi. He then transferred to Florida State and was later drafted by the Seattle Seahawks. Jones was enshrined into the Hall of Fame in 2014.

Laible is a third-year quarterback for the Blue Dragons from Little Elm, Texas.

As of the release of the Walter Jones finalists, Laible has guided the Blue Dragons to a 9-0 record and No. 1 ranking in the NJCAA.

This season, Laible has already become the program’s career leader in passing yards (5,419 yards) and touchdown passes (61) and is second in career completions.

Laible became the Blue Dragon’ starting quarterback at the midpoint of the 2020-21 season.

He started the final six games, including the 2020-21 NJCAA National Championship game against Snow College – the Blue Dragons won that game 29-27 to claim the first national football championship in school history.

Laible completed 55.4 percent of his passes for 782 yards with 11 touchdowns and only two interceptions.

Laible had a huge second season with the Blue Dragons, one that netted him first-team all-KJCCC/all-Region VI honors as well as honorable mention NJCAA All-America honors.

He had five-straight 300-yard plus performances, including consecutive games of 363, 365 and 365 yards. He also had a school-single-game record seven touchdown passes against Highland in a game where he was 11 of 15 passing with those seven touchdowns.

This season, Laible is completing 58.3 percent of his passes for 1,792 yards with 18 touchdowns and only two interceptions. He has a season-high of 278 yards passing and five touchdowns against No. 13 Navarro in the season opener. Laible also has two rushing touchdowns this season.

Hutchinson plays at No. 4 Iowa Western on Saturday in Council Bluffs, Iowa.