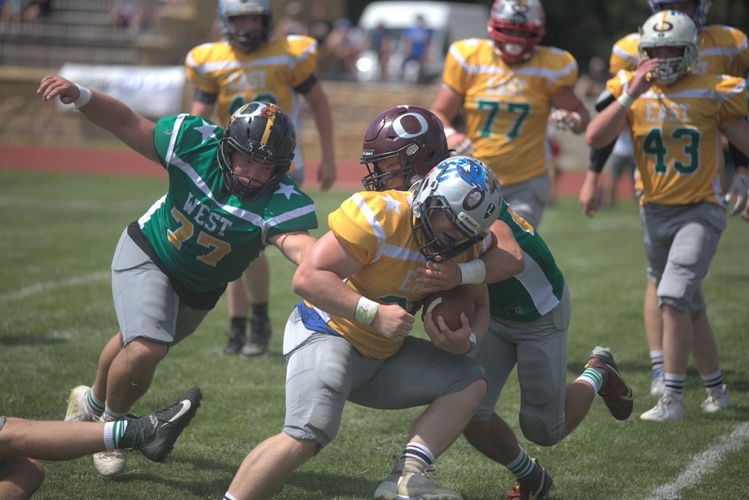 But after a late turnover, the West defense would be forced to buckle down once more to hold off the East.

A sack by Bucklin’s Scott Price and a fourth-down pass breakup by Central Plains’ Cole Lamatsch got the job done, helping seal a 20-14 West win at Trojan Field.

With the West protecting the six-point lead in the final minutes, the East moved inside the West 20 after a big fourth-down run by Lakeside quarterback Kylan Cunningham.

On second down, Price bolted up the middle on a linebacker blitz and sacked Cunningham for a 10-yard loss to help stall the drive.

“I saw the back lined up behind him, and just saw a big ole hole,” Price said. “I thought, you know that, we’ve got two minutes left, this is the last football game I’ll ever play, leave it all out there.”

“Scott Price is a big-time player,” said Minneola coach Reigo Hahn, who served as the head coach for the West. “He’s not going to go out and play college ball, but he needs to. I’ve had to coach against that kid since he was a fourth-grader, and I hated every moment of it. But it was nice to be able to coach him. … He’s the guy. He made the play, and he’s a playmaker.”

After the sack, the East picked up about 5 yards on a short pass before Cunningham lofted up a pass on fourth down that was batted down by Lamatsch, allowing the West to run out the clock with kneel downs.

“This weather definitely has been physically and mentally draining,” Price said. “We had been blessed with such amazing weather throughout this week, and this (heat) made it difficult. You could tell from the beginning that this group of guys just wanted it. We walked out there with confidence and drive and just wanted to get the win.”

The West did most of its damage through the air. Wheatland-Grinnell quarterback Trey Vincent threw for 229 yards. He hit South Central’s Tucker Uhl for a 30-yard touchdown to help West knot it up at 8 in the second quarter. Triplains’ Cayde Welsh hauled in a 48-yard pass from Vincent to extend the West’s lead to 20-8 on the last play of the third quarter.

“Trey’s going to go on to Ottawa and he’ll do really well,” Hahn said. “What I liked about Trey was he came over and he took the initiative to bring over suggestions. Trever (Powell, Bucklin coach and West offensive coordinator) would let him run what he wanted to, and that’s what you’ve got to do. He took charge of the offense, and the passing game went very, very well.”

In a play that ended up looming large, Vincent also caught a 9-yard touchdown from Bucklin’s Nathan Bowman off a trick play just before halftime to give the West a 14-8 lead at the break.

The momentum started to shift to the East when Kylan Cunningham hit Lakeside teammate Jace Schoen for a 51-yard touchdown to cut the West lead to six with 5:13 left in the fourth quarter.

On the ensuing possession, Vincent was pressured and threw an interception to Beloit-St. John’s Jaret Eitzmann, setting up the East near midfield. Cunningham moved the chains by breaking a tackle and racing for a first down in East territory before the big plays by Price and Lamatsch helped end it.

For Bucklin teammates and three-sport standouts Price and Bowman, it was a fitting way to wrap up their final game together.

“It’s pretty awesome,” Price said. “We ended our season rough against a great Wheatland-Grinnell team. … Ever since we were little, playing everything together, it just means a lot. Just glad we could end on a win.”

Osborne’s Mason Schurr rushed for 57 yards and a touchdown for the East while fellow Bulldog Dayton Lantz caught seven passes for 72 yards. Cunningham finished with 176 yards through the air with a TD.

Uhl had a game-high 92 receiving yards on four receptions.

Price said it didn’t take long to develop chemistry with his new-found teammates.

“Coming in, I wouldn’t say I was nervous, but definitely some people that I know and played against and definitely heard about that I wasn’t expecting to become such great friends with,” Price said. “Honestly, now I wish we would have had a few more days here because it’s such an amazing experience. It’s such a special event, getting all these smalltown kids the exposure that everyone deserves.”

Sutcliffe Has 3 HR Game in Blue Dragon Split with Colby