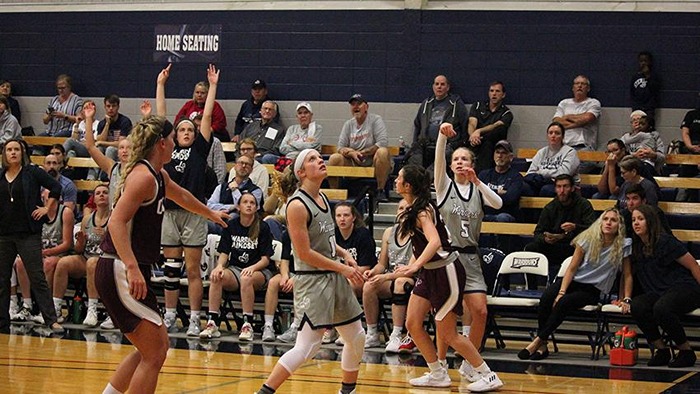 ATCHISON, Kan.-The Sterling College Lady Warriors had the opportunity to play another weekend tournament against some of the best in the region. (RV) Benedictine College and Baker University had a total of one loss between them coming into the weekend. By the end of the weekend, Sterling added two losses to their opponent’s combined total.

In game one of the weekend, Sterling played the host (RV) Benedictine College Ravens. As hard as Sterling tried, they were not able to pull away from the Ravens. Sterling led by as many as six in the first quarter but ended the high-scoring quarter with a three point cushion, 26-23. The Warriors pushed the lead to 8 midway through the second quarter before a four-minute scoring drought brought the scoring down to a snail’s pace after the hot start. When the teams headed to the locker room, Sterling held on to a slim five point lead, 39-34.

The third quarter was full of body blows by each team. The two teams traded baskets most of the quarter. Sterling led by as many as 8 and let it get as close as 2 points at other points in the quarter. After three quarters Sterling still held a lead, but just by six points to one of the top scoring teams in the country. The Warriors were able to push the lead to 12 early in the final frame and after runs by both teams, Sterling was up 10 with less than four minutes to play. Benedictine was able to chip away at the Warrior over the next three minutes to bring the lead to just 2 points with thirty seconds left in the game. With just 2 seconds remaining, Karsen Schultz was able to hit a pair of free throws to seal the win for Sterling. The Lady Warriors squeaked out a win against the host, 80-76.

Four Warriors were in double figures in the game. Taya Wilson led all scorers with 23 points, followed by Karsen Schultz off the bench with 17, Korynn Clason with 16, and Bailey Albright with 14. Schultz just missed a double-double gathering 9 rebounds in the contest. Bailey Albright played the role of thief with 5 steals.

The second game of the weekend was against Baker University. Baker was 3-0 coming into the contest with the Warriors. Sterling once again came out with a hot start leading by as many as 9 in the first quarter. With ten minutes in the books, Sterling led Baker 24-17. Sterling struggled to find their rhythm in the second quarter scoring just 12 points in the frame. With the lack of offensive production for the Warriors, the Wildcats were able to eliminate the deficit and tie the game up at one point. Baker once again scored 17 points in the quarter which left Sterling with just a two point halftime lead.

The third quarter was owned by Sterling’s tough defense. Allowing just 10 points in the quarter, Sterling was able to push the lead back to nine after three quarters of play. A handful of Warriors contributed offensively in the frame as they closed the quarter with a 53-44 lead. Just as they had done earlier in the night, Sterling let Baker back into the contest. Sterling’s offense went stale for a few minutes and before you knew it, the Warrior lead was just two points with plenty of time left to play. Sterling did not hit a field goal in the last five minutes and thirty seconds of regulation, but they were able to hit eight free throws down the stretch to secure the win. Sterling won by a final score of 65-58.

Bailey Albright and Taya Wilson each had 16 points for the Warriors. Bethany Stucky rounded out the rest of the double-digit scoring with 12 points. Taya Wilson completed her double-double efforts adding 15 rebounds to go with her 16 points and she stole 5 possessions from the Wildcats with her defense and a couple more by drawing a couple of charges.

Sterling was able to pull through on a rough shooting night. The Warriors shot just 42% from the field, were 1-10 from three point range and just an uncharacteristic 69% from the free throw line. Sterling is now 3-1 on the season. The gauntlet dose not get any easier as Sterling travels to Columbia, Mo. to take on #9 Central Methodist University on Tuesday night. Gametime is 7 pm.