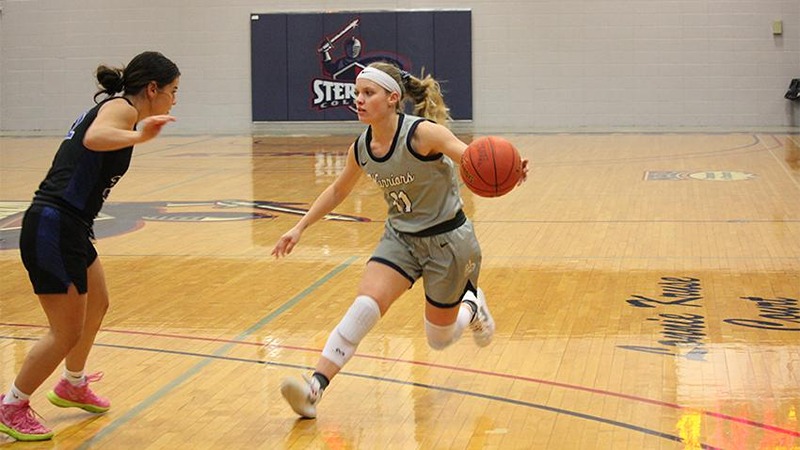 Sterling, Kan.- The Lady Warriors got right back to their winning ways Tuesday night in a runaway game against the York University Panthers. Sterling (4-3, 1-1) is coming off of a tough loss to Tabor University. York (3-4, 1-2) got their first conference win against Ottawa last Saturday. Sterling played like the #10 team in the country and owned the court from the tip to the final horn. The final score in Sterling was 82-56 in favor of the Warriors.

After giving up a couple of early baskets to York, Sterling took the lead on a Bailey Albright 3 pointer and never gave up the lead again. Albright and Karsen Schultz paced the way for the Warriors each scoring 8 in the quarter as Sterling jumped out to a 22-9 lead at the break. Sterling closed the quarter on an 8-0 run that left York scoreless for the last 2:53 of the quarter. Sterling amassed 5 steals in the quarter, two each from Schulz and Bethany Stucky.

Sterling continued to put the pressure on York with active hands on defense and not allowing the Panthers to get any clean shots. Sterling pushed the lead to 15 points early in the quarter. A small push by the Panthers was met by more Warrior defense. As the end of the half approached, Sterling took a 9 point lead and opened it up to 21 points by the break. Over the last 3:40 of the half, Sterling went on a 10-0 run to make the halftime score 47-26. Sterling was in complete control by the break. Sterling shot over 60% from the field in the first half.

Sterling held York scoreless for the first four and a half minutes of the third quarter making it eight straight minutes. The Warrior lead jumped to 29 points midway through the 3rd quarter. Sterling hit a cold spell and scored just two points over the last four minutes, but held a 19 point lead going into the fourth quarter.

It was cruise mode for the Warriors in the fourth quarter holding the lead near 20 points in the final ten minutes. When it was all said and done, Sterling extended the lead to 26 points. Every member of the Warrior bench got an opportunity to impact the game. Sterling’s first conference win of the season came in convincing fashion in the 82-56 win.

Karsen Schultz returned to her scoring ways knocking in 24 points on an incredible 10-13 shooting. She also grabbed 4 rebounds, 3 steals, and 3 assists. Bailey Albright scored 19 for the Warriors. Taya Wilson scored 15 points, brought down 9 rebounds, and had 3 assists before fouling out.

Sterling takes on Southwestern College in their next conference matchup on Monday, November 28, at 6 pm in Winfield, Kan. Southwestern is still seeking their first conference win and is 3-6 this season.