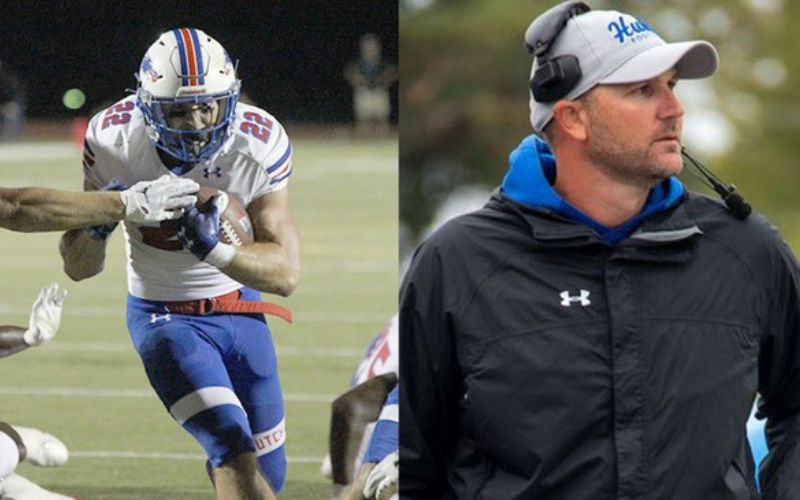 Dylan Kedzior (left) is named the 2022 KJCCC Football Offensive Player of the Year on Thursday. Blue Dragon head coach Drew Dallas (right) is the 2022 Coach of the Year.

HUTCHINSON, Kan. – The 2022 Jayhawk Conference champion Hutchinson Community College Football team had a total of 30 players on this year’s All-KJCCC Football teams, which were released on Thursday.

The Blue Dragons had 14 first-team, four second-team and 12 honorable mention selections, including winners of two of the three major awards presented each season.

DYLAN KEDZIOR – 2022 OFFENSIVE PLAYER OF THE YEAR
After a slow start to the season because of injury, Kedzior came to the rescue for the Blue Dragons at Coffeyville on September 24.

With Hutchinson trailing 9-7 in the fourth quarter, Kedzior entered the game early in the final quarter and had 12 carries for 85 yards and a 3-yard touchdown go-ahead touchdown run with 1:17 remaining to lead the Dragons to a 14-9 win.

That was the launching pad for the third-year 6-foot, 220-pound sophomore from Claremore, Oklahoma.

One week later, Kedzior rushed for a career-high 230 yards and three touchdowns against Butler. Starting with the final quarter against Coffeyville, Kedzior produced 578 yards and six touchdowns over a 13-quarter stretch.

For the season, Kedzior rushed for a league-best 923 yards on 119 carries with nine touchdowns. He is averaging a league-best 7.76 yards per carry.

DREW DALLAS, HUTCHINSON – 2022 COACH OF THE YEAR
The third-year head coach of the Blue Dragons earned his second league Coach of the Year award after running the table in the regular season with a 6-0 league mark and a 10-0 overall record which leads Hutchinson into the postseason as the No. 1 team in the NJCAA.

The Blue Dragons won their third-straight KJCCC championship in a row under Dallas, winning the 2020/21 league title, the 2021 KJCCC Playoff championship and this season’s regular-season crown.

The Blue Dragons are currently on a 16-game winning streak and Dallas is off to a 27-2 start at Hutchinson.

FIRST-TEAM OFFENSE
The Blue Dragons had a staggering eight selections on the first team of the all-KJCCC team.

Fullback/H-Back Jamauri Chislom is a rare three-time first-team All-Conference player. Known mostly for his blocking, Chislom had a career-high four catches for 29 yards in 2022.

FIRST-TEAM DEFENSE
The Blue Dragons placed five players on the first-team of the All-Jayhawk Defense this season.

Defensive end Nikki Taylor was third in the KJCCC in quarterback sacks with seven. Taylor had 40 total tackles with 15 tackles for loss, five quarterback hurries and a safety.

Freshman cornerback Ja’Maric Morris is the second first-team secondary member. Morris had 30 tackles and was fourth in the KJCCC in interceptions with four. Morris also had six passes defended.

FIRST-TEAM SPECIAL TEAMS
Freshman kicker Cole Segraves is the final first-team selection. Segraves has had a tremendous season, going 48 of 49 on extra points and 13 of 18 on field goals. Segraves has made his last six attempts.

Segraves has a long of 46 and has made three of at least 40 yards this season. Segraves’ 13 field goals are second-most in single-season program history.

He kicked the overtime game winner in a 31-28 victory over No. 7 Iowa Central on Sept. 10 at Gowans Stadium.

Green had 12.5 tackles for loss, including six quarterback sacks. Green had 37 total tackles.