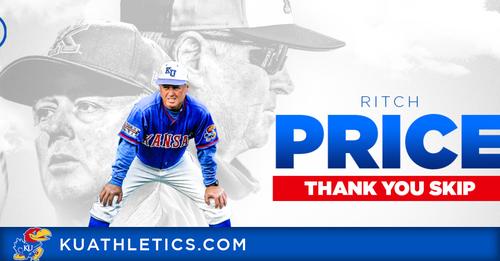 LAWRENCE, Kan. —
Ritch Price, the winningest coach in Kansas Baseball history, announced his retirement on Sunday after 20 seasons at the helm for the Jayhawks. One of the most respected college baseball coaches in the country, Price led Kansas to 581 victories, one Big 12 Tournament Championship and three NCAA regional appearances during his tenure in Lawrence.


““Ritch Price poured his heart and soul into the Kansas Baseball program for two decades, and we are forever grateful for his significant contributions to our university, athletic department and baseball program. His pride for Kansas Baseball is unmatched and he has made an indelible impact on countless young men and our program. On behalf of the entire athletic department, we wish Ritch the very best in his well-deserved retirement.””


DIRECTOR OF ATHLETICS TRAVIS GOFF
Price was named the 33rd head baseball coach at Kansas on July 1, 2002. In his first season at KU, he led them to a winning record and 35 wins, marking the most by the program in eight seasons. He posted 11 winning seasons with the Jayhawks, including a 43-25 mark in 2006, a 39-24 record in 2009 and a 35-26 record in 2014 and leading all three of those squads to the NCAA Tournament.

In his time at Kansas, Price has coached 109 all-conference selections, 147 academic all-conference honorees and has seen 75 Jayhawks go on to play professional baseball, including 10 Top 10 round draft picks.

Czyz had one of the most dominant seasons ever by a Kansas pitcher in 2006 when he led the nation with 19 saves and posted a 6-0 record with a 1.56 ERA. With Czyz at the backend of the bullpen, Kansas won 43 games, the Big 12 Tournament Championship and advanced to the NCAA Tournament for the first time since 1993. He was a seventh-round draft pick of the Florida Marlins.

Thompson became the first player in Big 12 Conference history to win the Triple Crown, leading the league in batting average (.389), home runs (21) and RBI (84) during a breakout season in 2009. He was named All-Big 12 First Team, a second-team All-American and was selected for the NCAA Chapel Hill Region All-Tournament Team. He also tied for third nationally in doubles with 27.

Czyz and Thompson were just two of the 14 All-Big 12 first-team selections Price coached during his time at Kansas, including his youngest son, Robby, who earned the honor in 2010. Price also stressed the importance of succeeding off the field, having at least one player named Academic All-Big 12 first-team in 18 of his 19 seasons.

Price also prepared his student-athletes for the next level, having four players – pitchers Jackson Goddard, Ryan Zeferjahn and Wes Benjamin and catcher Jaxx Groshans – drafted in the top five rounds of the Major League Baseball Draft. At least one player on Price’s roster was either signed or drafted in 18 of his 19 seasons. In 2010, headlined by Thompson’s selection in the sixth round, Price saw seven players drafted, including a pair of Lawrence products in Travis Blankenship and Brian Heere.

In his final two seasons, Price helped develop sophomore shortstop Maui Ahuna who finished the 2022 season with a .396 batting average, the highest mark by a KU player since 1997. Ahuna is touted as a top draft prospect for the 2023 MLB Draft.

Despite difficult Midwest weather conditions faced each season, Price always focused on finding a way for his squads to compete and play fundamentally strong baseball. A staple of Price’s teams was strong defense. In 2012, Kansas established a new program record in fielding percentage at .977. Additionally, the Jayhawks led the Big 12 in fielding each of the past two full seasons in 2019 and 2021. Over the last 10 seasons, Kansas has never had a fielding percentage below .965.

Price guided KU to twelve 30-win seasons in his tenure. The dean of the conference, he has also coached more than 250 Big 12 baseball games, more than any other active coach in the league. His 20 years in the Big 12 Conference match Texas’ Augie Garrido for the longest tenured coach in league history.

The Sweet Home, Oregon, native and 1978 graduate of Willamette University is a Hall of Famer as a player and a coach.

The search for the next leader of Kansas Baseball will begin immediately and Associate Head Coach Ryan Graves has agreed to serve as the interim head coach.


Statement from Ritch Price
“For the past 20 years, I have been honored and privileged to serve as the head baseball coach at the University of Kansas. After meeting with Travis Goff today, we agreed that it’s time for me to announce my retirement.

“First, I would like to thank everyone in Kansas Athletics who I have met, developed relationships with and have worked with the baseball program over the last two decades. This is an extraordinary place and you are the people that make it great.

“There are so many individual people that I want to say “thank you” to for their dedication and commitment to our players, coaches and program. Our sport administrator and Deputy Athletics Director, Sean Lester, our head baseball athletic trainer, Ken Wainwright, our strength and conditioning coach, Luke Bradford, our academic advisor, Glenn Quick, our equipment managers, Demetrius Daniels and Mike Hill Sr., our sports information directors, Brandon Perel and Mike Cummings, our director of baseball operations, Wally Marciel, and the world famous, Marcia Bagby.

“All of you form an incredible team and provide the expertise and resources to give our players a “Big Time” Power Five college experience.

“I want to thank all of the assistant coaches that I have been privileged to work with over the last 20 years. We grinded, competed, and overachieved to win the most games in program history!

“I want to personally say “thank you” to the many donors, alumni, fans and friends of KU Baseball. Your generosity, financial support and passion have helped our program grow and raise $7 million for upgrades to Hoglund Ballpark during my tenure as head baseball coach. Those upgrades have been instrumental in helping us develop our players to successfully compete in the Big 12 Conference.

“Finally, I want to thank all of the players that I have had the honor to coach and mentor over the past 20 years. I’ve always believed that baseball is a player’s game and I’ve always taken great pride in being a player’s coach. I’m so proud of the student-athletes who have played at KU during my tenure. My guys have represented our baseball program on the field, in the classroom and in our community in a first-class manner. I love you boys, you’re the best!

“As I’ve said many times, I’m a Jayhawk for life!”