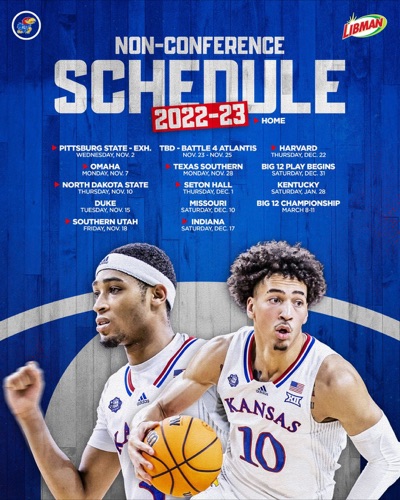 LAWRENCE (KU Athletics) – Nationally ranked non-conference schedules are common for Kansas men’s basketball, and the 2022-23 slate will be no different.

The non-conference schedule is highlighted by games in Allen Fieldhouse against Indiana, Seton Hall and Harvard as well as Southern Utah and Texas Southern. Kansas leads the NCAA Division I all-time wins list at 2,357, while Indiana is 10th at 1,890. The Seton Hall contest is part of the Big 12/BIG EAST Battle and KU defeated Texas Southern in the opening round of the 2022 NCAA Tournament en route to the national title.

Fans can secure season tickets today for all 17 home games, which includes the nine Big 12 Conference matchups, seven non-conference and one exhibition contest. The Big 12 was ranked first among all leagues in NET average in 2021-22. Tickets are available for as low as $500 by clicking here or visiting kuathletics.com. To order season tickets, fans must be active members of the Williams Education Fund, which can be done for as little as $100. More information is available by calling 785.864.3141.

“Once again we have a non-conference schedule that should prepare us for what will be another strong Big 12 schedule,” KU head coach Bill Self said. “This is a very attractive home schedule with games against Indiana and Seton Hall. Also mixed in is Duke in the Champions Classic in Indianapolis and road games at Missouri and at Kentucky. The Battle 4 Atlantis is a stacked field that includes USC, Tennessee and Wisconsin. Those, along with the Big 12, makes this a very competitive schedule and if we do well, it will enhance our chances for another high NCAA Tournament seed.”

KU will then host Texas Southern on Nov. 28 and Seton Hall on Dec. 1 in the Big 12/BIG EAST Battle. Next, Kansas will travel to HyVee Border Showdown foe Missouri on Dec. 10. Last year, Kansas defeated Missouri, 102-65, in Allen Fieldhouse in the first meeting between the two schools since 2012.

Kansas will then host Harvard on Dec. 22 and the 2022-23 Big 12 league schedule will begin Dec. 31. On Saturday, Jan. 28, Kansas will play at Kentucky in the SEC/Big 12 Challenge. Last year, KU passed UK in becoming the winningest program in NCAA Division I history, currently at 2,357 all-time wins. Kentucky is at 2,353.

Kansas is coming off a 34-6 season in which it won its sixth national title, fourth in the NCAA history. KU tied Baylor for first in the Big 12 regular season with a 14-4 record. It was KU’s NCAA-record 63rd conference regular-season title and 20th in the 26-year history of the Big 12. KU then won the Big 12 Tournament, advanced to its NCAA-record 32nd-consecutive NCAA Tournament, a streak that started in 1990, and its 16th Final Four. The Jayhawks won their last 11 games of the season en route to the NCAA title.

Home games in ALL CAPS