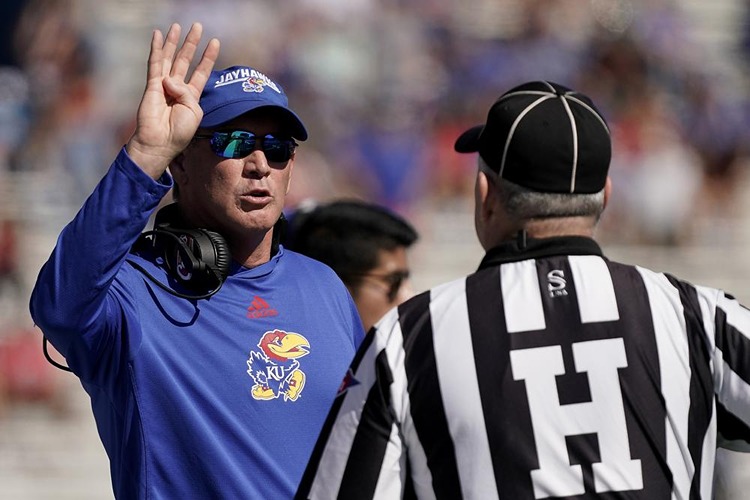 Kansas head coach Lance Leipold talks to an official during the first half of an NCAA college football game against Duke Saturday, Sept. 24, 2022, in Lawrence, Kan. (AP Photo/Charlie Riedel)

Line: Iowa State by 3, according to FanDuel Sportsbook.

Kansas will be trying to go 5-0 for the first time since 2009, when the Jayhawks reached that mark with a victory over the Cyclones in Lawrence. They also would likely break into the Top 25 with a victory as the top team to reside outside the rankings this week. Iowa State will be trying to rebound from a 31-24 loss to Baylor while extending its win streak over the Jayhawks to eight games going back to the 2015 season.

Kansas QB Jalon Daniels has thrown 10 touchdowns passes without an interception over his last three games. He was especially dynamic last week against Duke, throwing for 324 yards and four touchdowns while running for 83 yards and another score. He’ll be going against an Iowa State defense that tops the Big 12 in total defense (266 ypg) and scoring defense (14.5 ppg) and is seventh nationally against the run.

Iowa State: WR Xavier Hutchinson has followed up a school-record 83 receptions last season with 36 through four games, including at least eight in each of them. He is tied for second nationally in catches, 11th in yards receiving at 100.8 per game and seventh with five touchdown catches.

Kansas: DE Lonnie Phelps picked up his fourth sack of the season last week against Duke, tying him for first in the Big 12 and putting him 11th in the nation. He’ll be going against a Cyclones offensive line that allowed four sacks last week.

Iowa State has not lost to Kansas since a 34-14 setback in 2014. The Cyclones won 59-7 last season in Ames. … The Cyclones lead the Big 12 with eight takeaways, including four fumble recoveries. … Iowa State QB Hunter Dekkers is completing 71.6% of his throws, putting him second in the conference and in the top 15 nationally. He also has 10 TD passes. … Iowa State has held 14 of the its last 17 opponents to 350 yards or fewer in total offense. That includes 150 yards to Iowa this season. … Cyclones DE Will McDonald IV has 30 1/2 career sacks, the most among active FBS players. … Kansas is the fourth-highest scoring team in the country at 48.5 points per game. The Jayhawks have scored 27 touchdowns with two field goals through four games. They had 32 touchdowns all of last season.