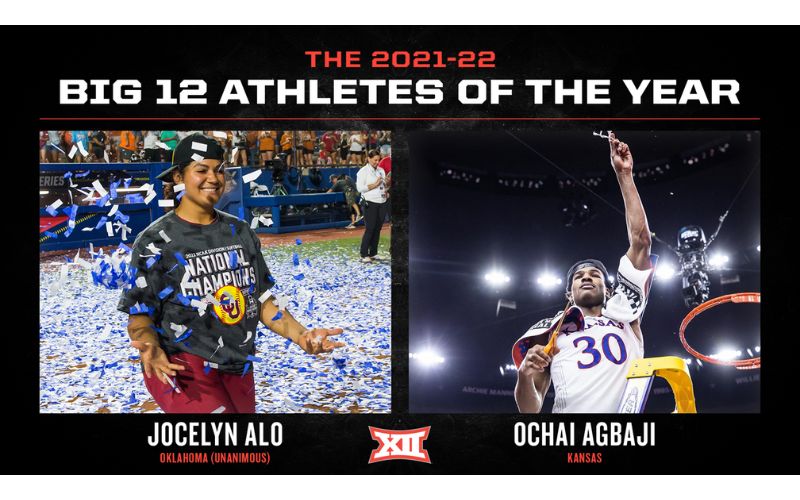 (Big 12 Sports) – Kansas basketball guard Ochai Agbaji and Oklahoma softball player Jocelyn Alo were named 2022 Big 12 Athletes of the Year, after each led their teams to national championships. Agbaji is the fourth Kansas male to win the award, and first since 2017. Alo, who was a unanimous selection, is the third consecutive Sooner female to win the award, and the eighth overall.

Nominees are submitted by Big 12 institutions and selected based on athletic performance during the 2021-22 school year by a media panel. Nominees must be in good academic standing.

Agbaji was the Most Outstanding Player of the 2022 NCAA Men’s Final Four as the Jayhawks captured their sixth national title. The Kansas City, Missouri native was the unanimous Big 12 Player of the Year and a Consensus All-America First Team selection, leading the Conference with 18.8 points per game. He was the Most Outstanding Player at the Phillips 66 Big 12 Men’s Basketball Championship, averaging 18.7 points in three contests.

Agbaji was selected by Cleveland with the 14th overall pick in the 2022 NBA Draft, and leaves Lawrence with the school record for consecutive games with a 3-pointer made (53). He ranks in the program’s career top-10 for 3-pointers made (250), consecutive starts (98) and minutes played (3,978).

Alo was the Most Outstanding Player of the 2022 NCAA Women’s College World Series, as the Sooners captured a second consecutive NCAA title, and the program’s sixth. The Big 12 Player of the Year, Alo won the Honda Sport Award for Softball, the ESPY for Best College Athlete – Women’s Sports and USA Softball Collegiate Player of the Year. She led the NCAA in home runs (34), batting average (.515) and slugging percentage (1.212).

The Hauula, Hawaii native set an NCAA career record with 122 home runs, breaking the record in her home state in March. She is currently a member of the United States national softball team.