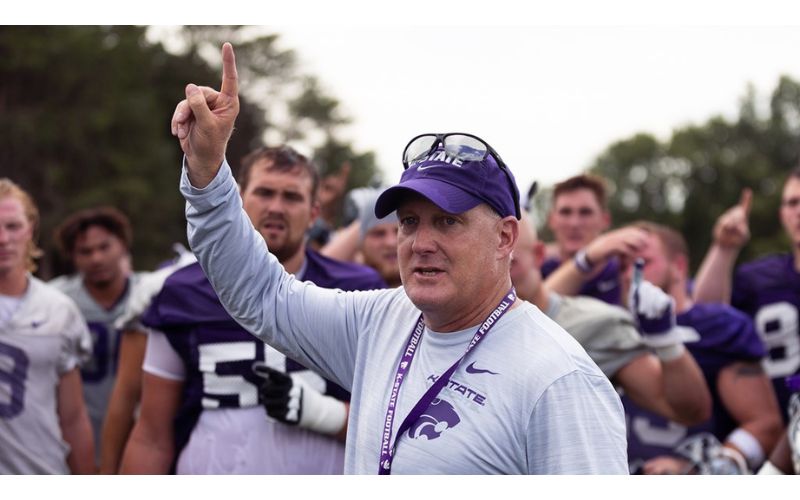 Manhattan, Kan. (K-State Sports) – Chris Klieman has been around several locker rooms during his time as Kansas State head coach. He probably hasn’t seen one exactly like what the Wildcats seem to possess so far in fall camp.

“We have as good of a locker room as we’ve had since I’ve arrived,” Klieman said during his news conference Monday as the Wildcats finished their fifth practice of fall camp.

K-State has 30 seniors, the most of any class, on its team, which received a shot of momentum in capping last season with a 42-20 victory over LSU in the TaxAct Texas Bowl. Klieman said that a leadership council of 23 players met with director of strength and conditioning Trumain Carroll each week during summer workouts. Klieman added that he has been able to meet with the council “a little more frequently.”

“They’re going to hold each other to the high standard,” Klieman said. “They know what the standard and expectations are on a daily basis. We have a really strong group of leaders and that’s not just the seniors. When you care about somebody you can hold them to that high standard because they know you’re trying to get the best out of them.

“It’s been fun to watch those guys challenge each other and grow.”

K-State spent its first two practices in just helmets and the last three in helmets and shoulder pads. Klieman said the team would practice in full pads on Tuesday for the first time.

“It’s been a good five days getting acclimated to being out there,” he said. “I’m excited to see where we’re at.”

K-State brought in Nebraska transfer quarterback Adrian Martinez this offseason to compete for the job of starting signal caller after record-setting Skylar Thompson finished his eligibility and was drafted by the Miami Dolphins. Martinez spent the spring recovering from surgery to his throwing shoulder but seemingly hasn’t missed a beat.

“He’s been really sharp,” Klieman said. “He’s done a nice job. He continues to learn what we’re doing. I know he and (offensive coordinator) Collin Klein and the quarterbacks sit in the morning and just continue to absorb more and more of the playbook and offensive scheme. I’m seeing some really, really good things throwing the ball and running the ball and getting us in the right play.”

There’s no question that 2021 Consensus All-American Deuce Vaughn, who’s regarded by some as the top returning running back in the Football Bowl Subdivision, can be a handful when he gets loose. However, one key question during the offseason has been locating a No. 2 running back.

“It’s wide open,” Klieman said. “I’ve been impressed with DJ Giddens. I think he’s made a nice step from where he was in the fall to spring and now spring to this fall. I’m excited about him. We have some competition — Jordan Schippers is still in there doing some good things; we have a junior college player, Anthony Frias II, who’s doing a nice job; and La’James White is doing a nice job. We have a lot of depth there. We have to put those guys really into the fire over the next two weeks to see how it’s going to shake out.”

The top wide receivers are locked in with Phillip Brooks, Malik Knowles and Kade Warner, but true freshman RJ Garcia “is in that top mix of guys who are going to play a lot for us and just continue to refine his skill and go up against cornerbacks Julius Brents and Ekow Boye-Doe and some older guys.

Quarterbacks coach Collin Klein is swinging over into his first season as offensive coordinator. The 2012 Heisman Trophy finalist provided some excitement with his playmaking during the bowl win and indications suggest there will be much more in store this fall.

“I know Coach Klein is excited for the opportunity and I’m excited for him,” Klieman said. “It’s going to be really neat to watch him grow in the position and watch him put his own spin on it and take his own ownership. He commands the room, there’s no question about that, and the guys respond to him. We have a really good chemistry on that offensive staff that I’m excited to work with and see how those guys grow together.”

While junior Felix Anudike-Uzomah was named Big 12 Preseason Defensive Player of the Year by a vote of the league’ coaches, Klieman also expressed excitement over 6-foot-5, 245-pound Nate Matlack, a sophomore from Olathe, Kansas, who has a chance to take a step this fall.

“He’s bigger, stronger, more knowledgeable, understands what we’re doing, probably added 10 pounds of weight as well as muscle, and we think he can have a real breakout year, especially with Felix on the opposite side drawing a lot of attention,” Klieman said. “It’s going to free up a lot of players, but Nate could be a big benefactor of it. Nate is in really good shape, and we’re excited about what he’s going to be able to do this year.”
Meanwhile, the countdown continues as the K-State defense prepares for life with a healthy Khalid Duke. The 6-foot-4, 246-pound junior hybrid linebacker/defensive end suffered a season-ending injury to his left knee last September and was held out of contact drills in the spring during a lengthy rehabilitation from surgery.

Klieman said that he’s confident that Duke is “going to be set and ready to go for the first game.”

“He’ll be fully healthy,” Klieman said. “There’s nothing he’s being held back from, but he’s just missed an awful lot of time. For us, some of the time he missed we’re getting back now in August and making sure he’s in tremendous shape and making sure physically his knee is back. We want to make sure that we have Khalid for the long haul and not just for the month of September. He’ll be ready to go, though, early on in the season.”

The biggest question for the Wildcats defensively has been depth at the safety positions. The Wildcats utilize three safeties, including free safety, strong safety and the jack position. The jack position allows a defender to assist with pass rush while defending against the pass in zone and man situations.

“We have a lot of depth and I’m excited about the competition,” Klieman said. “We’re playing six or seven guys in the three safety spots, and we don’t have an established depth chart by any means at either the free, strong or jack. Lots of people are getting a look, including some of the newer players who just arrived here — Drake Cheatum, Nickendre Stiger just arrived and they’re starting to get into the mix. VJ Payne and Jordan Perry are freshmen. Then you have older guys like TJ Smith and Cincere Mason, and Josh Hayes is an older guy but a new guy.

“Kobe Savage is doing a really good job back there. We’re excited to see him make that leap from spring and spending a ton of time this summer and learning more and hitting it in the fall.”

K-State, which finished last season with an 8-5 record, has been projected by some to be the dark horse to win the Big 12 Conference. The Wildcats were unranked in the USA Today Sports AFCA Coaches Poll released on Monday.

“We’ve got to earn that,” Klieman said. “We’ve got to control what we can control, which is on a daily basis being the best versions of ourselves, attacking every day at practice, and getting better.”

No. 20 K-State, Iowa St See Lot of Each Other in Themselves

Texas Tech Visits No. 25 K-State as Both Come Off Big Wins