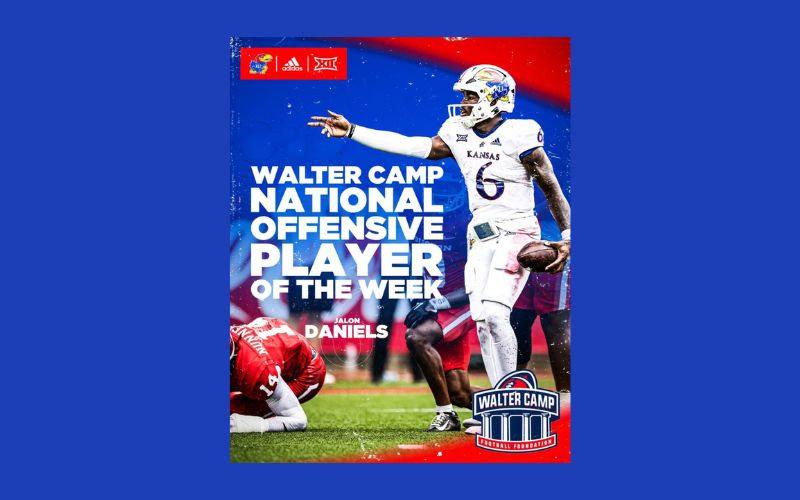 Daniels accumulated 281 yards (158 passing, 123 rushing) and five touchdowns (2 rushing, 3 passing) in the win over the Cougars on Saturday. Daniels completed 14-of-23 passes for three touchdowns and rushed for two more scores as the Jayhawks improved to 3-0 for the first time since 2009.

Daniels’ five-touchdown performance was the first of his career with multiple passing and rushing touchdowns, while he becomes the first Jayhawk since Todd Reesing in 2009 to throw and rush for two-plus touchdowns each in the same game. Daniels completed passes to 11 different receivers throughout the game, while he has now thrown for 556 yards and seven touchdowns through the first three games of the season.

The honor comes after Daniels was named the Manning Award Star of the Week, Davey O’Brien Great 8 List and Davey O’Brien Midseason Watch List on Sept. 12 after Daniels threw for 219 yards and 3 touchdown passes in the 55-42 overtime win at West Virginia.

This is the 19th year that the Walter Camp Football Foundation will honor one offensive and one defensive player as its national Football Bowl Subdivision player of the week during the regular season. Recipients are selected by a panel of national media members and administered by the Foundation.

Kansas returns home next Saturday, Sept. 24, to host Duke in the final non-conference game on the schedule. Kickoff of that game is slated for 11:00 a.m. CT at David Booth Kansas Memorial Stadium with a nationally televised broadcast on FS1.