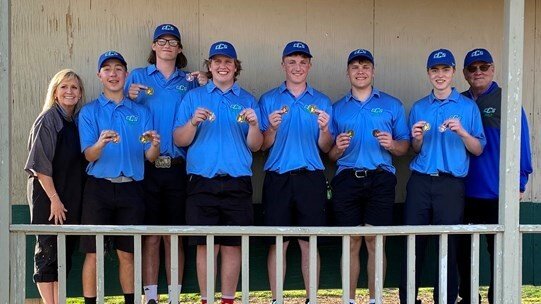 Hutchinson Central Christian golf coach Michelle Capps believes she has a team that’s capable of winning its first state championship. The Cougars certainly have gotten accustomed to winning this spring, taking first in all but one of their tournaments.

“The boys want it,” said Capps, who is in her second season leading the Cougars along with her husband and assistant, Bob. “They check the scores on the Kansas Golf Scores site each week. They know they’re pretty close to some of the other top teams.”


After finishing sixth last year in the weather-shortened Class 1A state tournament, the Cougars have replaced a senior-heavy lineup with two seniors, two juniors and two freshmen. One of the newcomers, freshman Ryland Kooiman, shot a 4-over-par 74 to win last week’s regional at Halstead’s Wedgewood Golf Course and led the Cougars to a team score of 357, the best of the four 1A regionals.

“Ryland has been playing since kindergarten,” Capps said. “He’s very committed. He’s very patient. He’s one of those guys who doesn’t get riled up. If he has a bad shot, you would never know it.”


While Kooiman leads Central Christian with an 83 stroke average, the Cougars’ winning formula has come from all six players contributing to team scores throughout the season. The group includes senior Carson Hamby, a member of the Cougars’ 2019 and 2021 state qualifying teams, and junior Drew Yoder, who played on last year’s team.

First-year player David Weis, a senior, has also contributed. He was the Cougars’ top finisher at the Larned Invitational and shot Central Christian’s second-best score at regional. Freshman Nathan Reed and junior Gage Regehr will also tee it up for the Cougars in the 1A tournament Monday at Hesston Golf Course.

“One thing with golf is it is an individual sport, but it’s very much a team sport,” Capps said. “These guys are all about the team. They pull for each other to do well.”