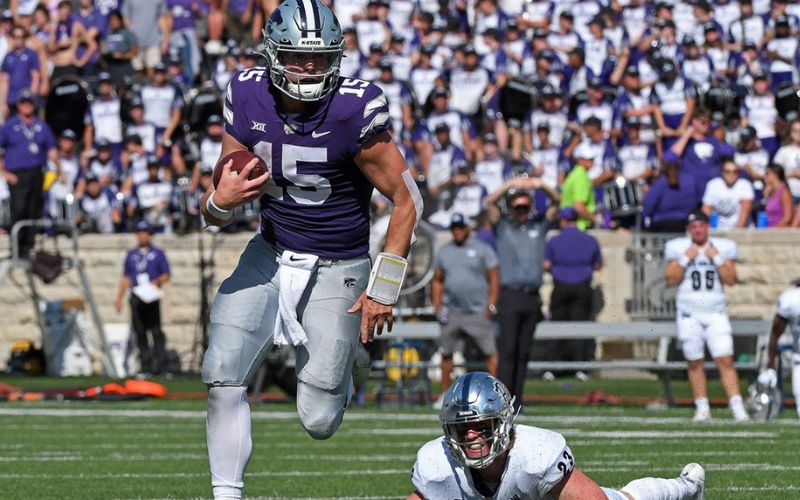 Manhattan, Kan. (K–State Sports) – Kansas State junior quarterback Will Howard was honored for the second time in as many weeks for his work in the community, as he was named to the watch list for the 2022 Wuerffel Trophy, the award’s committee announced Thursday.

The Wuerffel Trophy is named after Danny Wuerffel, the 1996 Heisman Trophy-winning quarterback, and honors college football players who serve others, celebrate their positive impact on society and inspire greater service in the world.

Howard’s mention on the list is the eighth-straight season a Wildcat has been up for the award since its inaugural season of 2015. Fellow quarterback Skylar Thompson was a candidate for the award the last two seasons, while Denzel Goolsby (2019), Dalton Risner (2017-18) and Dante Barnett (2015-16) were also up for the award. Risner was a finalist for the honor in 2018.

Also a candidate for the AFCA Good Works Team, Howard was the driving force behind K-State’s Get in the Game/Be the Match bone marrow registry drive, which presented an opportunity for people to be connected with a blood cancer patient in need of a bone marrow or stem cell transplant. K-State had over 90 of its football student-athletes join the registry, and Howard recruited 20 of his teammates to help with the on-campus drive. The event was extremely successful as the team was able to have over 400 K-State students join the Be the Match registry before running out of all swabbing kits.

Additionally, Howard is an approved Big Brother through the Big Brothers/Big Sisters program. Before completing the approval process, Howard worked with the BBBS program and participated in events where football players worked with the Little Brothers who were waiting for a pairing. They took them around the football facilities, played out on the field and enjoyed their time together.

Howard’s mention on the Wuerffel Trophy watch list is the eighth time in the last two weeks a K-State player has been named a preseason candidate for a major college football award. Running back Deuce Vaughn is up for both the Maxwell and Doak Walker awards, cornerback Julius Brents is a candidate for the Jim Thorpe Award, defensive end Felix Anudike-Uzomah is a candidate for the Bronko Nagurski Trophy, offensive lineman Cooper Beebe is on the Outland Trophy watch list, and punter Ty Zentner is up for the Ray Guy Award.

The 2022 season kicks off for the Wildcats on Sept. 3, when they host South Dakota inside Bill Snyder Family Stadium. It is the first of three-straight home games to open the year, as K-State hosts Missouri on Sept. 10 and Tulane on Sept. 17.