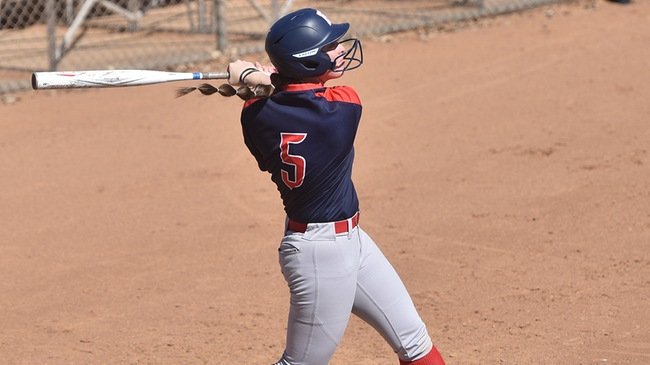 Aspen Goetz goes a combined 8 for 8 with eight RBIs to lead the Blue Dragons to a doubleheader sweep of Pratt on Saturday in Pratt. (Steve Carpenter/Blue Dragon Sports Information)
PRATT
– Freshman

Aspen Goetz
‘s perfect day at the plate paced the No. 15-ranked Hutchinson Community College softball team to a KJCCC doubleheader sweep of the Pratt Beavers and closed the 2022 regular season on a 12-game winning streak.

The Blue Dragons finished off the regular season with a pair of five-inning run-rule victories over the Beavers, 15-2 and 22-0.

Hutchinson is now 38-6 entering Friday’s Region VI Tournament, finishing second in the KJCCC for the second-straight season with a program record 29 conference wins (29-3). The 38 wins tie the 2016 and 2018 Blue Dragon teams for the fifth-most wins in a season in program history.

The Dragons will open play in the 2022 Region VI Tournament on Friday in Dodge City. Official pairings will be released early next week.

With a combined 37 runs scored on 38 hits on Saturday, the Blue Dragons had their biggest combined doubleheader output since Fort Scott last season when Hutchinson amassed 30 runs on 27 hits on February 5, 2021. The Blue Dragons combined for seven home runs in the doubleheader.

Ella Dougherty
both went 4 for 4 in the opener to pace the Blue Dragons.

Goetz had a homer, two doubles in her second four-hit game. The four RBIs matched a season high for the third time.

Goetz had an RBI single in the second, two-run home run in the third and had an RBI double in the fourth.

Dougherty had her third four-hit game with a double, two runs and a stolen base with two RBIs. Dougherty had a bases-loaded walk in the second and an RBI single in Hutchinson’s five-run fifth inning.

No other Blue Dragon had more than one hit, but 11 different Hutchinson players had hits and eight different Blue Dragons had at least one RBI.

Allie Stipsits
also had a double.

Riley Wertz
struck out the side in the fifth to close out the game.

The other home run came from sophomore

Twelve Blue Dragons had at least one hit and 11 different Hutchinson players had RBIs.

Goetz led the way with her second-straight 4 for 4 game – her third three-hit game of the season – with a homer, double and four RBIs. Goetz also had a two-run double in the second inning.

Anna Berblinger
came off the bench to go 3 for 3 with a double, two RBIs and two runs scored.


Madison Grimes
, Lexi Pitcher, Wertz and Stipsits all had two runs each.

Haley Miller
, McDaniel and Wertz had two RBIs each.

The Dragons had a season-high 10 extra base hits.

Morgan Pennycuff
combined for a one-hit shutout. Loney struck out two and hit a batter in the first two innings. Pennycuff (2-0) got the win with three shutout innings. She allowed one hit and struck out five.